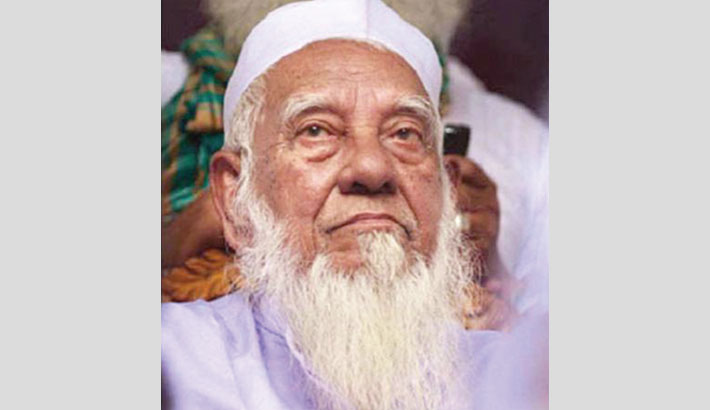 After his namaz-e-janaza led by his elder son Maulana Mohammad Yusuf on the madrasa premises at 2:00pm, he was buried at around 3:00pm.

Earlier on Friday, Ahmad Shafi breathed his last while undergoing treatment at Asgar Ali Hospital in the capital at around 6.30pm.

He had been suffering from diabetes, hypertension and old-age complications for a long time.

His body was taken to the Madrasa Jamia Arabia Imdadul Ulum Faridabad in the capital at around 11:00pm on Friday and kept there for his followers to have the last glimpse of their leader.

Earlier, an ambulance carrying his body, left capital for Chattogram at around 3:00am and reached the madrasa premises at around 9:30am. Members of Rapid Action Battalion (RAB) escorted the ambulance. The body was kept there till completion of his namaz-e-janaza and burial.

Thousands of his followers and well wishers throng the madrasa premises at Hathazari from different parts of the country, causing a large gathering in the area.

Additional forces will remain deployed until normalcy returns to the area, he said.

At different times, Ahmed Shafi, the top leader of Hefazat-e-Islam, drew widespread criticism from the section of progressive people in the country for his remarks on women and education.

He got admitted to Hathazari Madrasa at the age of 10.

In 1951, he moved to Darul Uloom Deoband, a university for Islamic education in India.

During his four-year stay in Deoband, Shafi received higher education on Tafsir, Hadith and Fiqah. There he came in contact with Islamic scholar Maulana Hossain Ahmad Madani and received Bayat (initiation) from him.

After returning to country, Shafi joined Hathahazri Madrasa as a teacher.

Shafi was also the chairman of Befaqul Madarisil Arabia Bangladesh, the largest Qawmi Madrasa board in the country.

He had been serving as the Director General of the Hathazari Madrasa since 1986.

In 2010, Shafi came to the fore when he floated Hefazat-e-Islam, an Islamic organisation in Bangladesh.

During his long period as Hefazat-e-Islami chief and Hathazari madrasa DG, Ahmad Shafi first hit headlines following the grand rally of Hefazat activists at Motijheel in the capital on May 5, 2013.

Earlier on Wednesday and Thursday, a section of madrasa students staged demonstration demanding removal of Shafi’s son Anas Madani from the post of the assistant director (education) of the madrasa.

They also demanded for appointing a new Director General replacing Ahmad Shafi for his physical inability.

Shafi resigned from the post of Director General at a meeting of the Shura committee on Thursday night.

The students alleged that Ahmed Shafi had been suffering from different old-age complications. So, he became dependent on his son Anas Madani for different official works.

Cashing in on the situation, Anas allegedly started boosting his influence in Hefazat-e-Islam and the madrasa.

He also allegedly terminated several teachers and officials of the madrasa without any show-cause notice.

Protesting the issues, the students started staging demonstration on the madrasa premises.

The agitators were reportedly followers of Hefazat Secretary General and the madrasa Assistant Director Junaid Babunagari who was relieved of the post of assistant director around three months ago.

The education board concerned closed the madrasa sine die on Thursday afternoon following the demonstration.