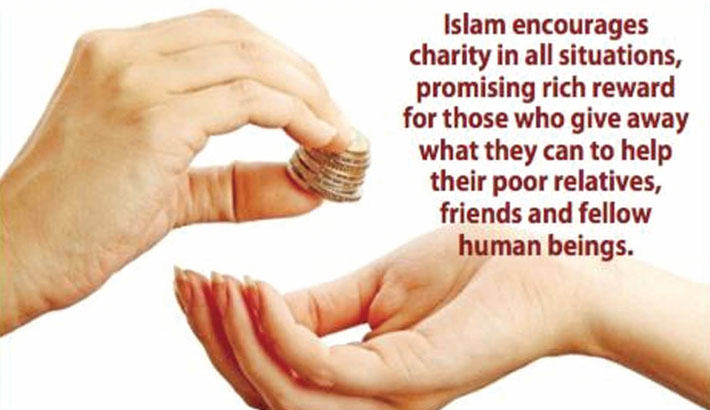 Islam attaches much emphasis to charity, requiring Muslims to pay their zakat regularly. In fact, zakat is an act of worship we perform by paying a percentage of our property to the poor and needy. There are other purposes for which zakat money is used, but the overall purpose of this great act of worship is to ensure that the Muslim community remains united, looking after the ones who are less fortunate in society. While the obligatory zakat represents the minimum that one must pay, there is no limit on what one may give in charity. In fact, Islam encourages charity in all situations, promising rich reward for those who give away what they can to help their poor relatives, friends and fellow human beings.

Numerous are the Qur’anic verses and statements by the Prophet (peace be upon him) encouraging charitable donations. Emphasis is also laid on choosing well what we want to give to charity. When the poor are given some of the worst type that we have, they may take it to heart that they are given what is of little use. Hence, the Qur’an stresses the importance of giving from what is good and useful: “Believers, spend on others out of the good things you have earned, and out of that which We bring forth for you from the earth. Do not choose for your spending the inferior things which you yourselves would not accept without turning your eyes away in disdain. Know that God is free of all want, ever to be praised.” (2: 267) Thus what we give away for God’s sake should be fit to be offered for that purpose. We should remember that whatever we have is given to us by God. Therefore, when we give for charity, we are only giving it back to Him, hoping for a better reward.

The Prophet’s companions give us the best example of implementing Islamic teachings. When they realized that a certain practice would earn God’s pleasure, they would immediately act on it. Abu Talhah was one of the richest people among the Ansar. However, the property he loved best was a piece of farmland called Bayruha, which faced the mosque. The Prophet used to go there and drink of a well of fine water. Anas, who was Abu Talhah’s stepson, reports that “when a verse in Surah 3 was revealed, Abu Talhah went to the Prophet and said: ‘Messenger of God! I hear what God has revealed, “You will never attain to true piety unless you spend on others out of what you dearly cherish.” (3: 92) Well, the property I love best is this piece of land, Bayruha, and I have decided to give it to charity, hoping for God’s reward. I assign it to you to do with it whatever you like.’ The Prophet said: ‘Well, well. This is a profitable investment. I understand what you said about it. I think the best use for it is that you divide it among your close relatives.’ Abu Talhah said that he would do that. He divided it among his relatives and cousins.” (Malik, Ahmad, Bukhari and Muslim)

While this hadith gives an important lesson in the proper approach to Islamic teachings, it is also entered in collections speaking of the Prophet’s character, under headings of his likes and dislikes, because it mentions the fact that he enjoyed drinking from that well. Apparently the Prophet liked fine water. Aishah reports: “Fine water was brought to the Prophet from a well in Suqya, a place at the peripheries of the area of volcanic rocks, close to the land of a certain family.” (Ahmad, Abu Dawood and Al-Hakim)

This hadith is mentioned more than once with some details in this version. It shows that the Prophet liked water that was light and refreshing. Hence, it was brought to him. We note, however, that Aishah does not mention the family owning the adjacent land. According to scholars, this was the clan of Zurayq of the Ansar.

Jabir ibn Abdullah reports: “A man from the Ansar used to cool water for the Prophet using water skins that had been well used, carrying it to him on a donkey.” (Muslim)

This is an example of how the Prophet’s companions treated him. They were keen to give him whatever he liked and what pleased him. This is a man who realized that the Prophet loved fine cool water, and he took care to bring it to him after cooling it in water skins and carrying it from distant places if necessary.

It is pertinent to ask what the Prophet used for dinking. On this we have a number of hadiths. Eisa ibn Tahman reports: “Anas ibn Malik produced for us a cup made of wood with an iron ring. He said to one of us: ‘Thabit! This is the Prophet’s cup.” (Bukhari and Tirmidhi)

Muhammad ibn Isameel reports: “I went into Anas ibn Malik’s home and saw there a cup made of wood. He said: “The Prophet used this cup for drinking and performing ablution.” (Abu Al-Shaykh).

Anas ibn Malik reports: “I served the Prophet in this cup drinks of water, milk and juice. It is only because I saw his fingers holding it with this ring I have left it as it is. Otherwise, I would have covered it with gold and silver.” (Tirmidhi)

These hadiths and some similar others give us an idea of the simple life the Prophet led.

He used the same wooden cup for his drinks and ablution, and it was tied up with a ring of iron. It could have any luxurious appearance the Prophet wished to have, but he was never after any aspect of luxury. Whatever served the immediate purpose was good enough for him.