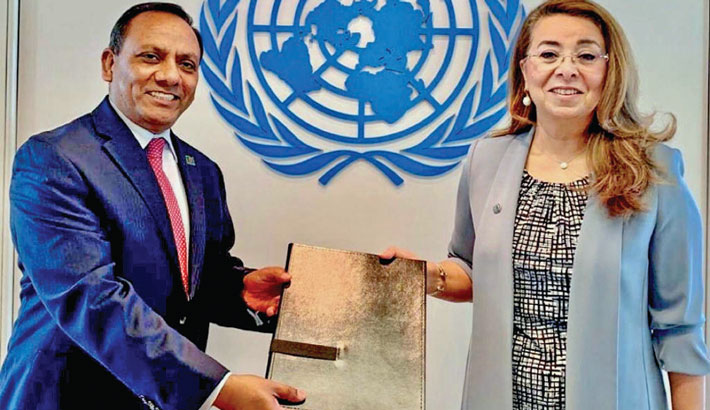 Permanent Representative of Bangladesh in Vienna Ambassador Muhammad Abdul Muhith presents his credentials to the Executive Director of the UN Offices in Vienna (UNOV) and Director-General of the United Nations Office on Drugs and Crime Ghada Fathi Waly at the UNOV Headquarters in Austria on Tuesday.

A top UN official has lauded Bangladesh for implementing projects and activities in the areas of tackling transnational crime, countering drug problems and combating terrorism and human trafficking.

She made the praiseworthy words during presentation of credentials by the Permanent Representative of Bangladesh in Vienna Ambassador Muhammad Abdul Muhith in Vienna on Tuesday. Muhith was accompanied by the Deputy Chief of Mission Rahat Bin Zaman to the ceremony.

She expressed her satisfaction at the increase of UNODC projects and activities in Bangladesh especially in the areas of tackling transnational crime, countering the drug problems, combating terrorism, among others, according to a message received from the Bangladesh Embassy in Vienna.

Ambassador Muhith thanked the UN official for accepting his credentials and informed the commitment of Bangladesh to uphold multilateralism in order to find global solutions to the global problems like drugs, trafficking in persons, cybercrime and so on.