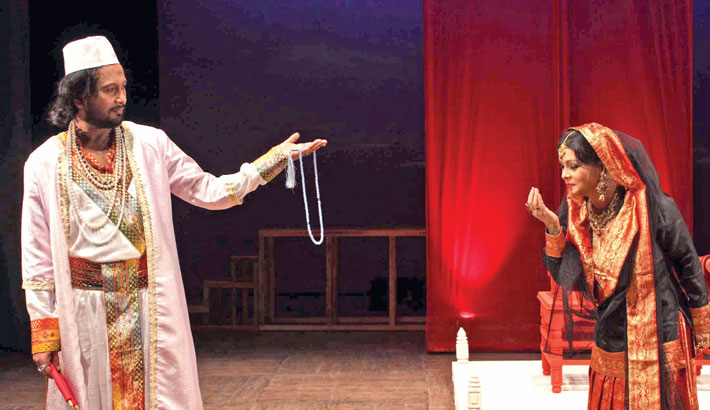 Popular theatre troupe Prangonemor will stage its much-acclaimed production ‘Aurangzeb’ today after six months. The 45th show of the drama will be staged at the Nilima Ibrahim Auditorium of Bangladesh Mahila Samiti at 07:00pm.

Written by Mohit Chattopadhyaya and directed by Ananta Hira, the historical matrix of the play, sketching the Mughal palace-politics on stage, provides a base for an exploration of man’s eternal greed for power.

Mughal emperor Shah Jahan’s son Aurangzeb’s war of succession to throne and ideological conflict with his father who is open-minded to all religions and wants to establish another Taj Mahal-like tomb for his own body at any cost, and Aurangzeb, who dreams of ‘one nation, one language, one religion’articulates and fiercely fights to establish an Islamic fundamentalist state, took the centre of the play.

When Emperor Shah Jahan fell ill in 1657, a war of succession broke out among his four sons, Dara Shikoh, Shuja, Aurangzeb and Murad.

The Emperor himself lent his support to his eldest son Dara, who alone of the four brothers, was present at Agra and sympathetic to Shahjahan’s dream-plan of building a black-marble-mahal for himself on the other side of Jamuna facing Mumtaz’s Tajmahal.

After liquidating his three brothers, he crowned himself emperor of India, assuming the title Alamgir (Conqueror of the World).