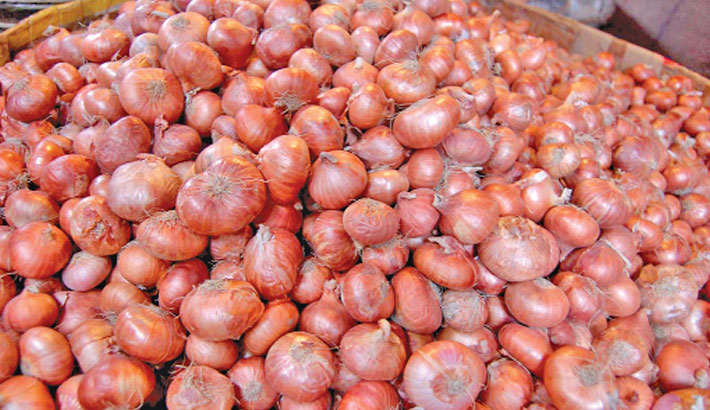 Onion price has started to come down from Thursday due to different government initiatives including market monitoring, withdrawal of import duty and launch of open-market sales by TCB.

Onion price soared by Tk 40-30 a kg in just day to Tk 100 per kg on Tuesday, triggering outrage among the consumers while the traders were allegedly cashing in the situation to bag hefty profits.

Onion price started to rise from September, but the latest spell of price hike occurred on Tuesday soon after India imposed a ban on the export of the much-consumed cooking ingredient on Monday.

Onion is a common ingredient in many local dishes and the soaring price of the item is causing a spike in food cost in the country.

Our Chattogram Bureau reports that onion price remained almost stable at the both wholesale and retail markets in the port city over the last two days.

The retailers were selling the item at Tk 60 to Tk 70 in Chattogram on Thursday.

Wholesale and retail customers rushed to the Khatunganj for buying the item fearing a price hike, which caused a further hike in price.

We have enough onions in stock the demand, those onions were not arriving at the market over the last two days, said Idris.

Besides, the onion consignments that remained stuck at the border will hit the market soon. Those who wanted to stock the item also might have started selling fearing the price fall, he added.

On the other hand, different importers obtained permission for importing the item from different countries including Myanmar, China and Egypt.

“We heard that some onions have already been shipped from other countries and are expected to reach the country within 10 days,” Mohammad Idris said.

Golam Rabbani, the owner of Yasin Store in the city’s Khulshi area, said they were selling Indian onion at Tk 70 a kg in the last two days.

Many grocers increased the price up to Tk 100 a kg after the news of Indian export ban has spread, he said.