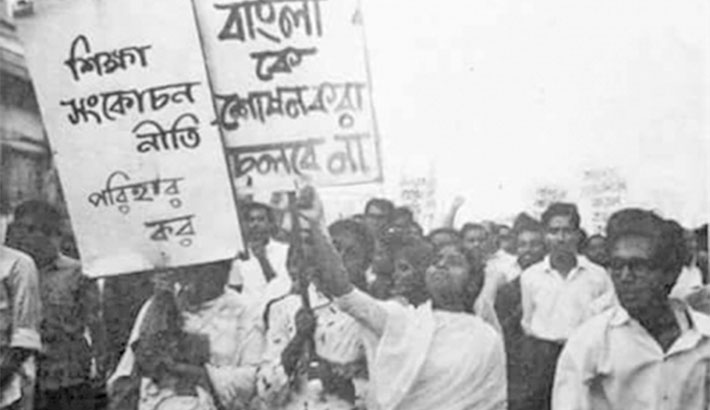 Today is the Education Day. This year celebration of the day commemorating the historic education movement of 1962 has come amid the world wide steps to manage the manifold crisis imposed by the COVID-19, particularly in the transformation of the traditional education system related to schools otherwise. On this day in 1962, school student Babul, bus conductor Golam Mostafa and domestic worker Waziullah sacrificed their lives in support of the movement of students. The movement initiated by college students in erstwhile East Pakistan in the early sixties culminated on September 1963. Known as the 1962 Education Movement, this was also a struggle against discrimination and deprivation in education and a series of onslaughts on Bangla language, songs (particularly Tagore song), art and culture. The immediate cause of the students' agitation was the Sharif Commission Report on education imposed by the then government.

This writer participated in the movement as an activist in the capacity of General Secretary of Dhaka College Students' Union. The movement was initiated and organised by students without any outside help. The central student leaders of University could not foresee that such a massive movement based on academic issues and problems faced by the students was possible. The momentum of the movement subsided when the then opposition leader H.S. Suhrawardy met East Pakistan Governor Golam Faruk and persuaded him to defer implementation of the Sharif Commission Report.

Education Day is being observed today when schools are closed, students are confined in home and government is exploring ways and means to re-open schools and hold public exams like the HSC. Two ministries which conduct education, the Education Ministry and the Ministry of Primary & Mass Education meanwhile have sent. Instructions and guidelines to the school authorities but it is alleged that teachers and respective school managing committees are not duly consulted.

BACKGROUND OF MOVEMENT: Some of the features of Sharif Commission report which were published in 1962 provoked students' agitation in East Pakistan. To mention a few among them: (1) the concept of free primary compulsory education is an utopia; (2) to introduce a Lingua Franca for Pakistan, Roman Script should be introduced and for that Arabic should be given priority; (3) Urdu should be made the language of the people of Pakistan"; (4) education should not be available at minimum cost and at a 'cheap price' ; (5) there is reason to see it at par with investment both in industry and education;  (6) two years' degree course should be upgraded to 3 years for improvement of quality at the higher education level.

Students reacted sharply to the above stated proposals. They clearly pointed out that the door of education has been closed to the poor and low-income people. The very connotation of "investment in education" triggered sharp reaction from the students. Action committees and sub-committees were formed in many institutions, continuously to protest against the extension of the tenure of degree course from 2 to 3 years. The agitation programme was started by Dhaka College students. One handicapped student of degree class, M.I. Chowdhury initiated it. Higher Secondary School certificate examinees who considered the new functional English courses at the H.S.C. level as extra burden also participated in it. Sporadic strikes and abstention from classes by students continued throughout this period. Students of medical school and also joined the movement, which included hunger strike. However, students' movement took a new turn on August 10, 1962 when students assembled in a meeting in the college canteen of Dhaka College. This writer, who was then General Secretary of Dhaka College Students Union, convened and presided over the meeting which was first of its kind. There was no link with the central leadership of student's organisations prior to this meeting. Now this meeting bridged the link. The Dhaka College students meeting announced general strike of students throughout the province on August 15. Students responded favourably, and a sit down action programme before the Secretariat was also announced. Series of meetings were held in between August 16 and September 10 at the historic Amtola of Dhaka University. Huge number of students both from the schools and colleges in Dhaka attended. The previously formed "Degree Students' Forum was renamed as "East Pakistan Students' Forum" with two joint conveners Quazi Faruque Ahmed from East Pakistan Students' Union (EPSU) and Abdullah Wares Imam from East Pakistant Students' League (EPSL). On September 10, a meeting was held at the Dhaka University Cafeteria where representatives from almost all the colleges of the city were present. The meeting withdrew the previously announced sit down strike but announced a fresh action programme of hartal or total strike on September 17.

EVENTS OF SEPT 17: Students started picketing from early morning on the day. The black colour Mercedes Bencz car of the Provincial Minister Hasan Askari was set on fire by the students. Some jeeps were also put ablaze. In the morning, a contingent of police led by Surgent Hafiz chased prospective demonstrators from Sadarghat to Nawabpur Railway crossing. By 9 a.m. Dhaka University Campus was packed up with students from schools and colleges of the city. At that time, news spread out that police opened fire at Nawabpur road. Hearing the news, a huge procession was brought out with Sirajul Alam Khan, Mohiuddin Ahmed, Rashed Khan Menon, Haider Akbar Khan Rono, Ayub Reza Chowdhury and Reza Ali. The procession entered Abdul Gani Road crossing the High Court when police fired from behind. Babul a student of Nobo Kumar High School was killed witj bus conductor Golam Mostofa, domestic worker Waziullah and many others seriously injured. Waziullah later died in the hospital. The firing at Abdul Gani Road infuriated the protesters which not only included students but also workers and employees of different mills and factories, rickshaw pullers and boatmen from across the Buriganga river.

Two chief characteristics of the 1962 education movement deserve special mention: firstly, the movement was initiated by the students alone without any outside influence and, secondly, the central student leaders could not foresee that such a huge movement was possible based on academic issues and problems faced by the students. The reputed student leaders of Dhaka University who have written articles and published books on the sixty two education movement also unfortunately could not trace the origin, background and composition of the movement. They have highlighted the last phase of movement in and around Dhaka University. That the movement was initiated by college students and participated massively by school students through out the country. It is high time therefore to make proper evaluation of the sixty two education movement which subsided eventually when opposition leader H. S. Suhrawardy came over to Dhaka from Karachi during the last leg of the movement. He met East Pakistan Governor Golam Faruk and was able to persuade him to defer implementation of the Sharif Commission report.

The old concept and programmmes in education that prevailed before covid19 has lost its relevance to a great extent. Now is the time to introduce and practise new plans and programmes in consistence with the existing situation. The proposal to introduce a new cadre in administration in the name of ICT is worth mentioning. This year Education Day has come with this new message.

Prof. Quazi Faruque Ahmed was an organiser of 1962 education movement and a member of National Education