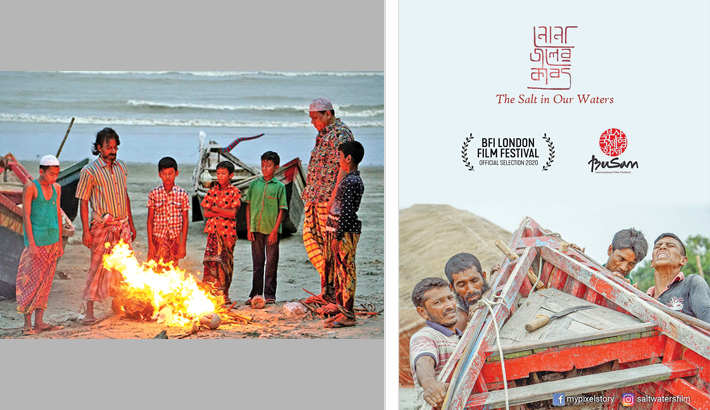 Young director Rezwan Shahriar Sumit’s feature film ‘The Salt in Our Waters’ (Nonajaler Kabya) will have its Asian Premiere at the 25th Busan International Film Festival.

The 10-day festival will begin in South Korea on October 21.

Sumit made the discloser in his Facebook post on Monday. “I’m thrilled that my first feature film ‘The Salt in Our Waters’ (Nonajaler Kabya) will have its Asian Premiere at the 25th Busan International Film Festival”, he said.

“I’m grateful and humbled by this invitation. I would like to take this opportunity to thank each and every one of my cast and crew members. I would also like to make an earnest request to everyone – please help us spread the news! The bigger the audience, the bigger the impact, Sumit’s post reads.

‘The Salt in Our Waters’ is an audacious story about the effects of climate change and the clash between beliefs, set in a tiny fishing community on the Bangladeshi coast (Patuakhali).  The main character is Rudro, a 32-year-old sculptor from the city who moves to this remote place after the death of his father, and who is accused by the inhabitants of the village of being cursed. The movie has been produced jointly by Bangladeshi and French production companies namely mypixelstory and ARSAM International.

Popular Bangladeshi filmmaker Amitabh Reza Chowdhury’s production company Half Stop Down is the line production partner of the film.

The film also won Bangladesh’s National Film Grant in 2017, and a writing grant from Director Spike Lee in 2016.

It may be mentioned that The Salt in Our Waters will be premiered at the 64th BFI London Film Festival on October 7.