Prepare guideline for next generation to run country: PM

Economy in good position, she says 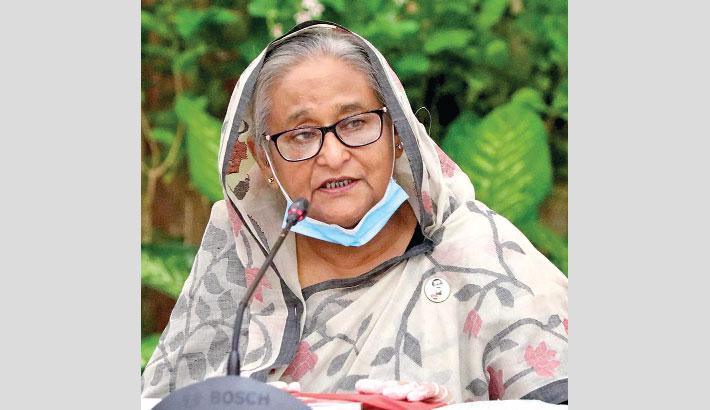 Ruling Awami League President and Prime Minister Sheikh Hasina on Wednesday slammed opposition parties for giving only lip service instead of standing by the people amid the ongoing coronavirus pandemic.

“Other political parties and non-government organisations have given only lip service. They have not stood by the people. Only Awami League leaders and activists have come forward to help people, risking their lives,” she said.

Sheikh Hasina came up with the remarks while delivering introductory speech at a meeting of the party’s presidium members at her official residence Ganabhaban in the capital.

The premier said the government has extended all-out support to the people from all walks of life amid the ongoing corona pandemic.

“As Awami League is in power, it thinks of the welfare of the people and have extended all-out support to them,” Sheikh Hasina said.

“If any other party is in office, they would not think in that way rather they would take benefit from the corona situation. But we have stood by the people cordially. It is our principle and our goal. The Father of the Nation has given us this lesson and we have been working accordingly,” she said.

The AL president thanked leaders and activists of the Awami League and its associate bodies such as Juba League, Chhatra League and Krishak League, and government officials and members of law enforcement agencies for their all-out efforts to help people in this crisis period.

After a long break, the Awami League held the meeting with Sheikh Hasina in the chair as all kinds of political activities had been suspended due to the deadly bug.

“We have not held a single party meeting for the last couple of months. Now we are gradually starting political activities,” Sheikh Hasina said.

The Awami League president stressed the need for preparing a concept paper or guideline or framework for the next generation to run the country and take the country forward in the future.

“As we are in power, we have to take the responsibility to find ways for the next generation on how the country will run and advance not only in present days but also in the future. So, we will have to take preparation for it now,” she said.

Sheikh Hasina also what the Awami League government is now doing might be amended or changed if time demands.

“We know that change will happen. Despite this fact, if there is a framework or a concept paper or a guideline for the next generation, it will be easy to do any work for them whoever comes to power,” she said.

Referring to the increase in remittance inflow and forex reserves amid the corona crisis, the premier said it has become possible due to the government’s timely measures. “Our economy is now by and large in a good position,” she added.

“None thought that our remittance will increase. It is increasing as we’re giving two percent incentive (for sending remittance) and our forex reserves now stands at $39.4 billion,” she said.

Speaking about the expatriate Bangladeshis who have lost jobs amid the pandemic, the premier said, “It becomes a problem for us as many Bangladeshis have lost their jobs. But we are bringing them back by special flight as they are the citizens of our country.”

She also mentioned various measures taken by her government since the very beginning of the crisis created over the corona pandemic and said they have announced various stimulus packages, handing over cash and other assistances to keep moving the country’s economy and ease sufferings of the people, particularly the farmers, labourers and teachers.

Noting that an abnormal situation has been created due to corona pandemic and normal livelihoods are being hampered across the globe, the premier said, “Despite this situation, we have been trying to keep running the wheels of the country’s economy.”

Apart from the coronavirus pandemic, Sheikh Hasina said her government had to deal with natural calamities like flooding and cyclone Amphan.

“We have been able to face the challenges as we have taken timely and effective measures to this end,” she continued.

The premier also said they have opened mills and industries in phases as exports came to a standstill at a time when the country’s industries remained closed and announced special stimulus packages for the small, medium and large industries to keep running their wheels.

The premier said stimulus packages have also been announced for the agriculture as part of a move to ensure food security as she apprehended that the world might face food crisis and famine due to the onslaught of ongoing corona pandemic.

At the outset of the discussion, a minute’s silence was observed as a mark of profound respect to the memories of Bangabandhu and other martyrs of the August 15 carnage, martyrs of the August 21, 2004 grenade attacks and the leaders and activists who died recently, particularly party presidium members Mohammad Nasim and Advocate Sahara Khatun.