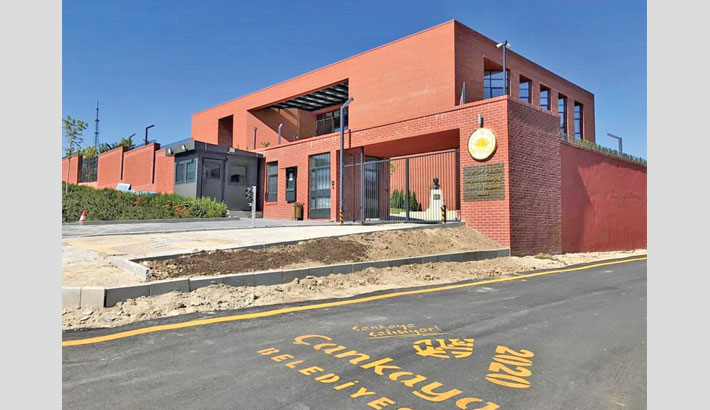 Having the native architectural characteristics and evolution through history as well as contemporary trends in Bangladesh, diplomatic sources said the most modern Chancery Complex will exhibit the architectural heritage of Bangladesh more powerfully.

The beautifully constructed Bangladesh Chancery Complex in Ankara was completed on September 3 at a cost of Tk 45.76 crore.

Diplomatic sources said previously most of the Bangladesh’s embassies hosted in rented houses, but the government of Prime Minister Sheikh Hasina after assuming in power in January 2009 began construction of own permanent chancery complexes in foreign lands. As a result of her pro-active policy, Bangladesh now has permanent chancery complexes in several countries and many others are now on way to completion.

As reflection of Bangladesh’s history of independence, a bust of Father of the Nation Bangabandhu Sheikh Mujibur Rahman and Shaheed Minar were also installed at the chancery complex, according to the Ministry of Foreign Affairs.

Moreover, 36 sqm mural works titled ‘Invincible Bangladesh’ as well as terracotta works on the rural life of Bangladesh were also placed at the complex.

A protocol between Bangladesh and Turkey on Exchange of Land Plots for Diplomatic Missions was signed in Dhaka at the Foreign Minister level on November 14, 2010, which paved the way for acquisition of land plots mutually exchanged between the two countries for construction of diplomatic missions in their respective capitals.

Later in 2012, Prime Minister Sheikh Hasina laid the foundation stone for the ‘Construction of Bangladesh Chancery Complex in Ankara’ project and the bust of Father of the Nation Bangabandhu Sheikh Mujibur Rahman at the site at Oran Diplomatic Zone during her visit to Turkey in 2012.

The implementation of the project received a renewed boost after M Allama Siddiki, Ambassador of Bangladesh to Turkey and current Project Director, took charge of the mission. Officials said Tk 2.26 crore was refunded by Bangladesh Embassy in Ankara at the successful completion of the construction project.