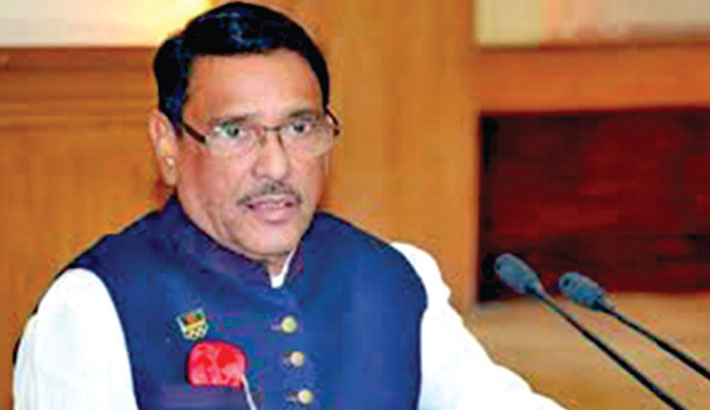 Road Transport and Bridges Minister Obaidul Quader on Sunday said the friendly relation between Bangladesh and India is now smoother, warmer and more futuristic than any time in the past.

“With her diplomatic efficiency, Prime Minister Sheikh Hasina has built a relation of trust between the two neighbouring countries to cooperate with each other to take ahead the mutual development,” he said.

Quader, also the Awami League general secretary, was addressing a review meeting on the progress of the under-implementation projects in Bangladesh under the Indian Lines of Credit.

He joined it through videoconferencing from his official residence on the parliament premises here.

Describing Bangladesh and India as trusted and time-tested friends, the minister said if friendly relations and people to people connectivity exist between two the next-door neighbours, many unresolved bilateral issues can be solved easily.

Settlement of enclaves, land boundary and maritime issues and taking up initiatives for resolving other issues between Bangladesh and India are the examples of that, he added.

Pointing to the ministry officials concerned with projects under the Indian Lines of Credit (LoC), Quader said it is taking much time to begin the projects under LoC for different reasons.

Completion of necessary preparations, including survey, consent of Indian authorities, concurrence of Indian EXIM Bank and activities of Bangladesh side are taking much more time than expected, he added.

The minister urged the officials concerned to give special importance to taking ahead the projects under LoC as these are connected to the mutual progress between the two countries.

About the BNP’s allegation that the government is giving wrong account of coronavirus (Covid-19) positive cases, the AL general secretary said BNP is alleging that the government has dropped the names of 82,000 patients from the statistics of Covid-19 patients.

“But I want to know what is the benefit of the government in doing so?” he posed the question.

“We want to say that you (BNP) give the list of the 82,000 patients whose names have been dropped. There will be no benefit to beat around the bush,” he said.

Quader said BNP’s traditional political culture is to make falsehood as the party’s politics is dependent on conspiracy, carrying out killings and terrorism.

BNP is out to make evil attempts to create an issue over any matter as they are now getting nothing out of their conventional practice, he added.

The minister said people want to know from where BNP’s responsible leaders are getting such strange and imaginary information of hiding the names of 82,000 patients when everything is open in the era of technological advancement.

Making welfare for the country and its people is not in BNP’s dictionary and practice, and therefore, it is now doing politics capitalising on only falsehood, he added.

On the occasion, Quader extended birthday greetings to Sheikh Rehana, younger daughter of the Father of the Nation Bangabandhu Sheikh Mujibur Rahman.

During the crisis period after the assassination of Bangabandhu and most of his family members on August 15, 1975, Sheikh Rehana stayed beside Awami League leaders and workers from behind the scene.

She worked as a co-warrior of Bangabandhu’s elder daughter Sheikh Hasina in silence, he added.

The AL general secretary wished a long and healthy life for Sheikh Rehana on her birthday.