His Chicago speech of 1893 created new craze among American people 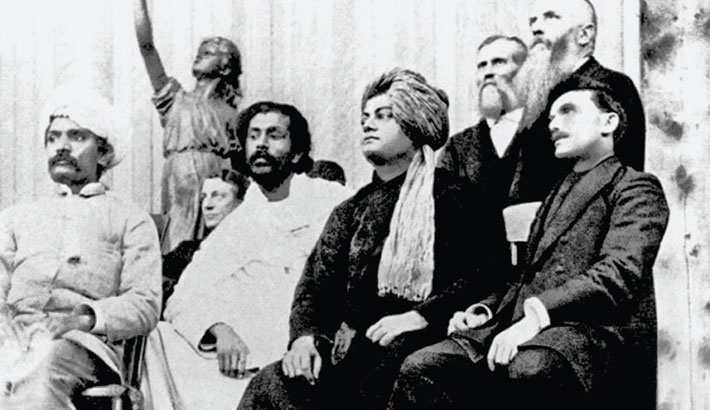 First day session of World Congress of Religions in Chicago 1893 September 11 is a terrible day in recent history of the world. It reminds us of the deadly militant attack on Twin Tower in America in 2001, but this date is memorable for another reason. On this day in 1893 Swami Vivekananda delivered his famous speech at World Congress of Religions in Chicago which is commonly known as Chicago Speech of Swami Vivekananda. During British colonial rule it was not at all easy nor smooth for a native to join that congress from India crossing a distance of 7,800 miles on sea. Record informs that Ajit Singh, King of Khetri (Rajsthan, India) arranged a first class ticket of the Orient (an ocean-going ship) for Swami Vivekananda but in spite of holding a first class ticket he had to face troubles like food and racism simply because of being an Indian. At that time India was known as a land of sorcerers and snake charmers. Moreover, he had no identification nor any recommendation to attend that congress. At last, utilising the personal influence of John Henry Byte, a professor of Harvard University, he was allowed an opportunity to speak only for three minutes in that congress.

Cardinal Givant, president of the opening session, introduced Vivekananda to the audience. At the beginning he said, “My brothers and sisters of America” which was very unusual and unprecedented to the Americans. Seven thousand audience gave him standing ovation and started clapping that continued for more than two minutes. He had only one minute left for speech but the audience was eager to hear him and on permission from the organisers he continued. While other speakers were trying to establish supremacy of their own religions, Vivekananda gradually described the synopsis of Gita and mythology regarding life, death, soul, divinity, truth, devotion, knowledge, virtue, vice, tolerance towards other religion etc.

Expressing gratitude to the audience he said, “As a representative of the world’s oldest religion I convey my heartiest thanks to all of you irrespective of caste and creed. I am proud to represent a nation that has taught the world to tolerate and accept everyone eternally. We have accepted all religions as true. This religion not only accepts other religion but can easily acknowledge their positive features. From time immemorial this religion has proved its greatness by providing shelter to people of other religions of the world.” Then he recited verses from Gita.

He continued, “Rivers flow in different streams and finally mingles with the sea. The sea never asks for the way of a river.  Similarly, people of different religions reach the same God finally. God never deprives them of his blessings because of belonging to another religion. So, religious meanness, fanaticism and tussle for supremacy is meaningless. Sectarianism and orthodoxy have haunted this beautiful world for long. That monster has filled the world with violence, often attempted to destroy civilisation leaving human race in despair. Otherwise the world could be much better. Now the bell that rings this morning will be the death knell of all kinds of religious violence, intolerance and persecution.”

Regarding God he said that God is infinite like the sky or space or the sea.  As the rose smells equally in any name, God cannot be explained simply through spelling. In any name he may be called without being superstitious and hostile towards other religions. As a boy, I remember hearing a Christian pastor in India speak at a crowded meeting. He said, “If I hit this idol like your doll with my stick, what can the idol do to me? ” Suddenly one of the people present there said, “If I insult your God, what can he do?” The pastor replied, “Then you will be punished after death.”  The man said, “ Then my god will punish you after you die.”

Why the Christians go to church. Why is the cross so sacred? Why do we look at the sky during prayer? Why so many idols are placed in a Catholic Church? Why do Protestants have a terrible form of prayer? The idea of ​​holiness is normally associated with the church, mosque or the cross and the Hindus have linked the concept of God with various idols and symbols but why? When you see inanimate objects according to the context of the mind, it is born mentally special.indus use external symbols during worship that help them to fix mind on god. Like you he also knows that the idol is not God. The difference is only the way, not the target.

Some people spend their entire lives within the boundaries of their religions without gaining broader status. Every human soul rises like a baby eagle to a higher level, gradually accumulates energy and finally reaches its highest goal. For a Hindu, the world of religion is nothing more than moving towards that God through different tastes, characteristics, men, women, conditions and environments. All religions are the consciousness of people. God is at the centre of all religions but why so much contradiction? The Hindus say that the difference is apparent but ultimately God is the goal. Sunlight looks different through multi-coloured glass. Everyone can see it but actually sunlight is true.

Everything is very sacred and influential, an advanced helper and devoted to mankind. What is the result of this education. I dare say that like the Hindus no one else can see the same idea in all theological doctrines. Even outside the realm of our race and religion we see perfect men. One more thing. One may ask the question that how can the Hindus, who are devoted to God, believe in obedience like Buddhists and atheist Jains? Buddhists and Jains do not rely on God but on all their great original theories. The omnipotence of their religion is directed towards the development of divinity in human beings. O my brothers ! Superstition is the enemy of man. Idol worship of the Hindus is not their sole duty but if one can understand one’s divine nature with the help of idols, is it fair to call it a sin?

It is simply impossible to realise the situation of 127 years ago when there was no television, radio, facebook, e-mail, what’s app, instagram to spread the speech of Swami Vivekananda instantly. In spite of that, only through newspaper his speech reached all over America and different corners of the world very shortly. Many people accepted the message of an unknown Bengalee saint. A new craze was created among the Americans. Without being prejudiced to any other religion, speech of Swami Vivekananda contains everything (theological and practical) of human life. It is not possible to accommodate everything in this short space but even after 127 years, when fanaticism, religious extremism, intolerance and violence is mounting, message of harmony and tolerance of Swami Vivekananda is always relevant.