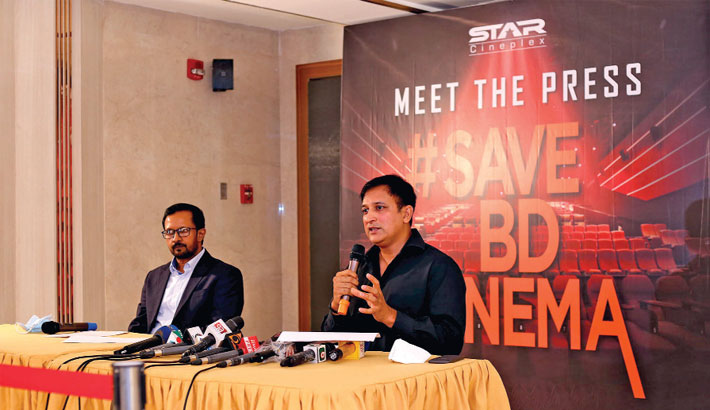 Star Cineplex Chairman Mahboob Rahman Ruhel placed a 7- point demand at a press conference held at its SKS Tower branch in Mohakhali DOHS area on Wednesday, seeking assistance for the survival of the beloved multiplex brand in Bangladesh, reports UNB.

“Since the beginning of the nationwide lockdown back in March, cinema halls including all three branches of our Cineplex have been shut down. The pandemic has been taking a substantial toll on every business; however, other businesses have been reopening except for the theatres”, Ruhel said.

Ruhel said that the movie theatre chain brand has been dealing with huge financial losses because of their recent gigantic investments to start several brand new multiplexes in the country due to public demand, before the pandemic changed the reality - as a twisted result, not generating any revenue for the last five months.

“We opened three new branches in 2018 and 2019 with high interest bank loans, and we were preparing to start our new branch at Mirpur in the capital this year. We have not been generating any income for five months, yet we cannot cut costs any further by layoffs or interest reduction. We need to open our theatres because if we don’t, and receive the assistance we need - we might have to get lost into oblivion forever.”

As possible solutions to the crisis, Ruhel presented a seven-point demand to the government, including, The theatres should be reopened immediately maintaining proper health regulations. Immediate announcement of financial assistance or incentives. Reduction of vat and taxes on movie tickets. Approval for interest-free loans from banks and Allowing to import films that are made in South Asian subcontinent languages without any conditions.

Apart from these demands, Ruhel also urged for the remission of theatre rents during the pandemic and proposed to pay half the rents going forward till the situation gets back to normal, addressing the Bashundhara City (Panthapath), Shimanto Shambhar (Dhanmondi) and SKS Tower (Mohakhali) authorities where the Cineplex branches are located in the capital.

Ruhel also urged the Producer’s Guild to take steps for releasing the lined-up unreleased, new films that have been cleared by the censor board, in order to cater the audiences once the theatres get reopened.

“Cineplexes and halls have already been reopened in many countries around the world, including China, Germany, Russia, the United Kingdom, France, Denmark, Norway, Italy, Singapore, South Korea, Malaysia - and also scheduled to be reopened in India this month. Additionally, the governments of different countries are also providing financial assistance to compensate for the loss related to culture and entertainment.

Star Cineplex started its journey in 2004 at Bashundhara City as the first multiplex in Bangladesh.