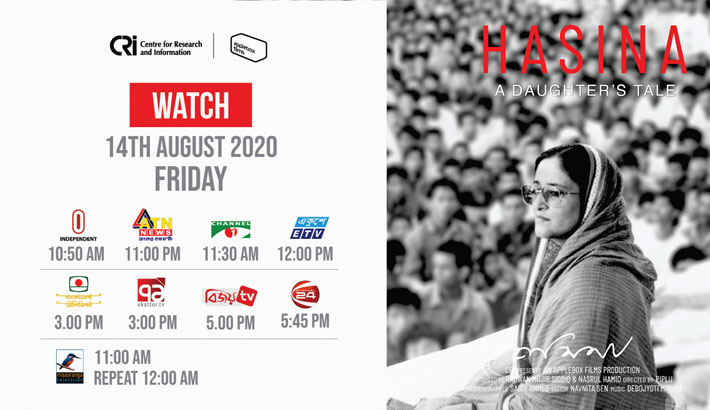 Hasina: A Daughter’s Tale’, a docudrama, will be aired on Bangladesh Television and eight other private television channels today to mark the National Mourning Day.

Based on the life of Sheikh Hasina, the eldest daughter of the Father of the Nation Bangabandhu Sheikh Mujbur Rahman, the docudrama is an ambitious attempt to analyse and document the persona of the iconic political figure of the third world.

The docudrama opens with the heinous assassination of her father in 1975, and subsequently unfolds her family’s change in fortune and the dramatic rise in power again in turn. It depicts the story of a daughter’s straggles, sorrows and triumphs.

Produced by Radwan Mujib Siddiq and Nasrul Hamid on behalf of the CRI, the film was directed by Applebox Films founder Rezaur Rahman Khan Piplu, with Sadik Ahmed as cinematographer, Navnita Sen as editor, and Debojyoti Mishra as the music director.

In the film, Sheikh Hasina and Sheikh Rehana talked about the lifestyle of Sheikh Hasina after the heinous assassination of their father Bangabandhu Sheikh Mujbur Rahman in 1975.

In a nutshell, the film ‘Hasina – A Daughter’s Tale’ unfolds the stories of Sheikh Hasina and different aspects of her personal life.