Save the kids from ‘dark world’ 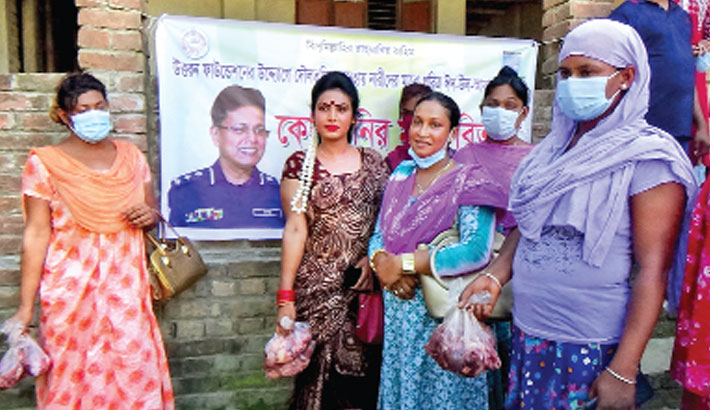 RAJBARI: Daulatdia of Rajbari, the largest brothels in the country, which is now known as Daulatdia Purbapara. A group of people made of flesh and blood live in the village. There are 1,600 women and girls working in the brothel and roughly 400 children living with their mothers. The daughters of brothel workers try to hide the fact that they have reached puberty, to avoid being forced to start working in the brothel.

Children born here live everyday life watching their mothers being exploited, some help their mothers in household chores and bring refreshments for their mother’s clients. Boys tend to become pimps once they grow up and girls continue in their mothers’ profession. Most girls enter the profession before the age of 12.

Seeing their mother's profession, they create hatred towards mother and society. At one stage these children were engaged in various crimes. So, the Uttaran Foundation is working to bring the children of these sex workers back into the mainstream and make them part of the society.

‘Uttaran Foundation has been providing socially forsaken children of the brothel a fighting chance to emancipate themselves from the shackles of a life defined by discrimination, bondage and sexual cruelty,” said Rajbari Police Super Md Mizanur Rahman. In addition to access to education, it provides them with a home away from the brothel environment, food, clothing and counselling.

Besides sports, music, cultural activities, religious teaching and even basic IT training, the girls are provided life skills training to empower them to make choices about their futures and to raise their self-esteem.

“I want to save their innocent kids from the ‘dark world’ and to save of the underprivileged people,” said DIG Habibur.

“Every profession in society has freedom,” he further said.

“Residents of Daulatdia Purbapara earn money by sex work for life and livelihood. A group of musclemen had been sharing there income for so long. So that no one snatches their income the police are keeping shelter on them,” said Goalanda Thana Officer-in-Charge Md Asiqur Rahman.

When a girl completes 18 years, she will be able to enroll in this profession from within the rules. This is so for any under aged girl of that is why she does not come to the profession and does not force anyone into this profession. Arrangements will be made to train those who are unfit to work in sex, if they want to go for another profession. Sex workers are separate from society and have no personal or social relationship with them.

“We want to keep these children out of the sex village and make them perfect man as a part of society,” said founder chairman of Uttaran Foundation.

Habibur Rahman said about janaza, the last right of a man among sex worker after death in this old profession, our society neglected that a man after death is his deprived of janaza. The creator is the owner of the judgment of human sin and virtue. “It is his social and human rights that we practice janaza of the sex workers,” he further said. Islamic spiritual leaders have for decades rejected funeral prayers for sex workers because they view prostitution as immoral.

To improve the living standards of these underprivileged people, the Uttaran Foundation has set up several dairy farms, beauty parlours, boutique houses, mini garments and tailors shop across the country.

DIG Habibur Rahman, the founder chairman of the foundation, said, “Uttaran Foundation is all over the country to improve the living standards of transgender people”. He spoke about the social status of transgender people, they are knowledgeable, efficient and the intellect is no less than the mainstream population. Due to the physical structure, today their family and society can’t accept them like other people.

Members of the transgender community are not a burden of society. But for social and environmental reasons, they are living away from their own children.