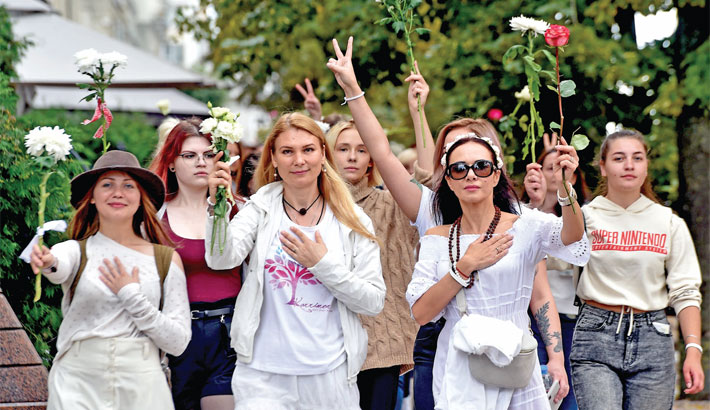 Women holding flowers protest against police violence during recent rallies of opposition supporters, who accuse strongman Alexander Lukashenko of falsifying the polls in the presidential election, in Minsk on Thursday. —AFP PHOTO

Prominent Belarusians including Nobel Prize-winning author Svetlana Alexievich have condemned the violence and urged Lukashenko, who has ruled Belarus with an iron grip since 1994, to step down.

For the second day in a row on Thursday, dozens of women, many dressed in white and holding flowers, formed a human chain in the capital Minsk to condemn police violence.

The interior ministry said 700 more people had been arrested for taking part in illegal gatherings on Wednesday, bringing the total number detained since Sunday to more than 6,700.

The ministry said there had been fewer demonstrations Wednesday than on previous nights but that “the level of aggression towards members of law enforcement remains high”.

It said 103 members of law enforcement had been injured in the unrest since Sunday, with 28 hospitalised.

After large-scale gatherings in Minsk and other cities on Sunday, the protests have become scattered and smaller as police cordoned off city centres and shut down public transport.

Protesters say police have become increasingly aggressive as demonstrations go on and on Wednesday the interior ministry said its forces had used firearms on a group of protesters armed with metal rods in the southwestern city of Brest.

Officials also confirmed the second death in the unrest, after police said a first protester died on Monday when an explosive device went off in his hand.

The Belarusian Investigative Committee, which probes major crimes, said in a statement that a 25-year-old man died after he was detained on Sunday for taking part in illegal protests in the southeastern city of Gomel and sentenced to 10 days in prison.

Investigators said the cause of death was unclear, though his mother told local media he had heart problems and had been out to see his girlfriend, not to take part in protests.

There have been widespread reports of police using indiscriminate violence against protesters and even passers-by.

In an interview published on Wednesday, Alexievich, winner of the 2015 Nobel Literature Prize for her work chronicling life under the Soviet regime, expressed outrage at the “inhumane, Satanic” actions of riot police and urged Lukashenko to go peacefully.

“Leave before it’s too late, before you’ve thrown people into a terrible abyss, into the abyss of civil war,” she told her long-term foe in an interview with Radio Free Europe/Radio Liberty.

Other prominent Belarusians have joined calls for the violence to end.

Belarus’s four-time Olympic biathlon champion Darya Domracheva posted a call on her Instagram account urging riot police to “STOP THE VIOLENCE. Do not allow this unjust horror to continue on the streets.”

She put out another post calling on “both sides” to stay calm.

Several prominent journalists and presenters with state media have also resigned in recent days in protest at events.

EU foreign ministers are set to discuss Belarus at an extraordinary meeting on Friday, with some in the bloc calling for the re-imposition of sanctions.

The protests broke out after authorities said Lukashenko won 80 percent of the vote in Sunday’s election to secure a sixth term.

Lukashenko, 65, has dismissed the demonstrators as foreign-controlled “sheep”. On Wednesday, he said they were “people with a criminal past who are now unemployed” and told them to get jobs.

The protest movement arose in support of Tikhanovskaya, a 37-year-old political novice who ran for president after potential opposition candidates including her husband were jailed.

The official results gave her 10 percent of the vote, but Tikhanovskaya said the election was rigged and claimed victory, demanding that Lukashenko hand over power.

She left for neighbouring Lithuania on Tuesday as allies said she came under official pressure.