Mayors firm to give the city a new look 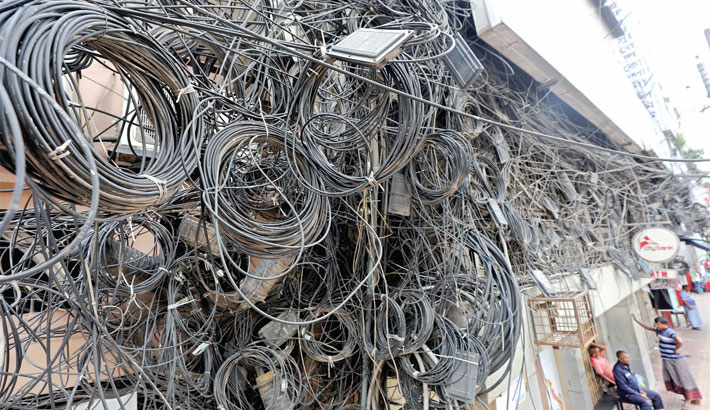 Dhaka city is going to wear a new look soon as the two city mayors have pledged to remove overhead cables by December this year.

Official sources said nearly 4,000 internet and 600 cable TV operators have been illegally running their business in the capital.

Though it is a difficult task, both mayors are pledge-bound to free the capital from the overhead cables, they said.

The authorities of both city corporations have already started working to take the overhead internet and cable TV wires underground.

DSCC Mayor Sheikh Fazle Noor Taposh on Monday said all kinds of overhead cables would be removed from the city area by December.

“There is no chance to be relaxed about our stance on removal of the overhead cables,” he said.

DSCC chief estate officer Rasel Sabrin has said the cable operators have illegally been doing business in violation of the law.

“But now the mayor stands firm on the removal of overhead cables from the city by December,” he said.

The DSCC has already been conducting drives at Dhanmondi, Gulistan, Hazaribag, Khilgaon and Wari to free those areas.

The DNCC has also started taking the overhead cables underground. The primary work has been underway on Gulshan Avenue.

Cable Operators Association of Bangladesh said they have allowed only 250 cable TV operators in the two city corporations but some 600 more operators have been operating their businesses illegally.

Following the instances of modern cities across the globe, the government in 2009 took an initiative to relocate all types of wires to underground.

The government awarded the task to two organisations -- [email protected] and Summit Communications -- to set up infrastructure for managing underground operations under the Nationwide Telecommunication Transmission Network (NTTN) project.

At that time, it was decided that various cable TV operators and ISPs will provide their services through underground cables.

Though, almost all the government organisations have installed cables under the ground, most of the wires of cable operators and ISPs remain on the streets overhead.