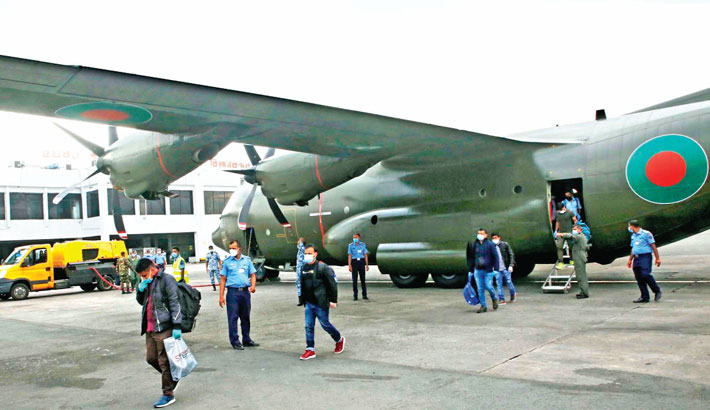 A transport aircraft of Bangladesh Air Force brings back 71 Bangladeshis from Beirut on Wednesday. —ISPR PHOTO

DHAKA: An aircraft of Bangladesh Air Force (BAF), which carried relief materials to Lebanon, brought back 71 Bangladeshis from Beirut on Wednesday.

Earlier, the BAF aircraft with the emergency supplies reached Beirut on Monday.

Bangladesh, as a token of friendship, sent humanitarian and relief assistance to the victims of the horrific explosion in Beirut, Lebanon on August 4.

The mission consisting of a 12 BAF Air Crew was led by Group Captain Santanu Chowdhury of BAF. The mission was conducted under the guidance of Chief of Air Staff of Bangladesh Air Force, Air Chief Marshal Masihuzzaman Serniabat, the press release added.

The Bangladesh Air Force has always been providing air transport services to carry relief and humanitarian assistance to the victims of any disaster in the friendly countries as per the guidance of the government of Bangladesh on an emergency basis. In line with this, emergency relief and medical supplies, a physician and a technical team to assess the real scenario of the damaged Naval ship were sent to Lebanon August 9 as humanitarian assistance to help the affected Bangladeshi expat, local people of Lebanon and members of Bangladesh Navy deployed in UN peacekeeping operations in Beirut.