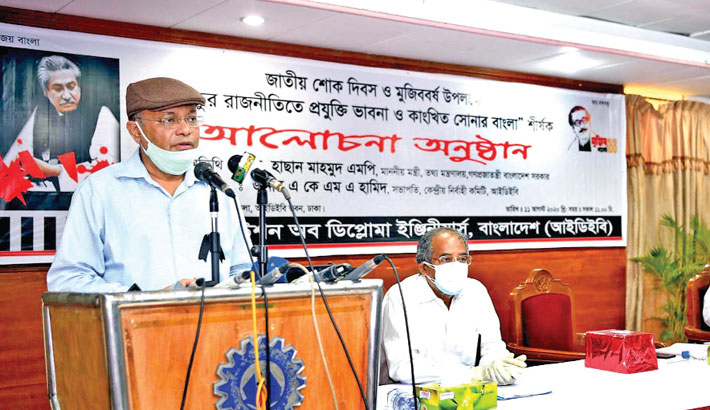 Information Minister Dr Hasan Mahmud speaks at a discussion on the birth centenary of Bangabandhu, ‘Mujib Year’ and the Day of National Mourning at the auditorium of the Institute of Diploma Engineers, Bangladesh (IDEB) in the capital on Tuesday. SUN PHOTO

“Assassination of Bangabandhu was not meant for killing only, it was part of a conspiracy to destroy the newly independent country,” he said.

Hasan, also joint general secretary of Awami League, made the comments at a discussion at the auditorium of Institute of Diploma Engineers, Bangladesh (IDEB) in the capital. The event was organised by IDEB marking the birth centenary of Bangabandhu, ‘Mujib Year’ and the Day of National Mourning.

The information minister said the conspirators at home and abroad who opposed the country’s independence thought that Bangladesh would never be able to hold its head high.

Hasan said when Bangabandhu was assassinated in 1975, the country’s GDP growth was 7.4 percent.

“Even after 40 years of his assassination, we could not exceed that growth rate. Bangladesh exceeded 7.4 percent GDP growth in fiscal 2016-17 under the leadership of Bangabandhu’s daughter Sheikh Hasina,” he added.

About the coronavirus pandemic, Hasan said not a single people died of starvation due to a well-planned relief operation led by the Prime Minister.  Even, the country has provided aid abroad, he added.

“But BNP and other like-minded political parties don’t notice the country’s development,” he said.