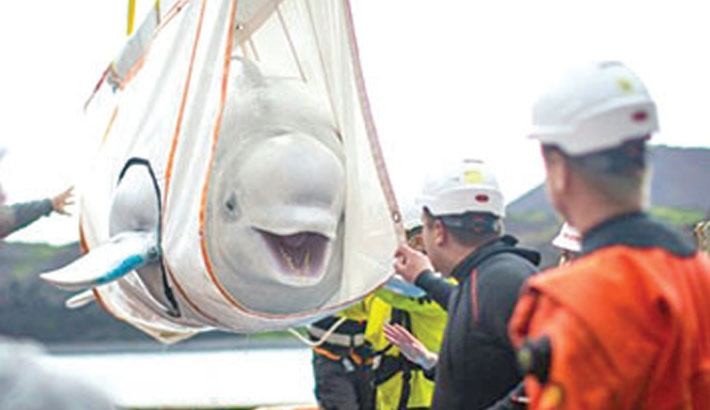 Two beluga whales from a Shanghai aquarium have returned to the sea in an Icelandic sanctuary, conservationists said Monday, expressing hopes of creating a model for rehoming some 300 belugas currently in captivity, reports AFP.

Little White and Little Grey, two 13-year-old females, left behind their previous lives entertaining visitors at the Changfeng Ocean World in June 2019 when they were flown to Iceland’s Klettsvik Bay in the Westman Islands, in specially tailored containers. On Friday, they were moved from their land

based facility to care pools in the sea at Klettsvik Bay—the first time the two belugas have been in the sea since they were taken from a Russian whale research centre in 2011, the conservation charity Sea Life Trust said in a statement on Monday.

They will stay in the care pools “for a few weeks” before they are released into the bigger sanctuary, a 32,000-square-metre (344,445-square-foot) sea pen that will become their home, organisers said.

Little Grey and Little White “will need a short period of time to acclimatise to their new natural environment and all the outdoor elements before they are released into the wider sanctuary in Klettsvik Bay,” the statement said.

After having been cared for by humans for so many years, it is unlikely the belugas would survive in the wild.