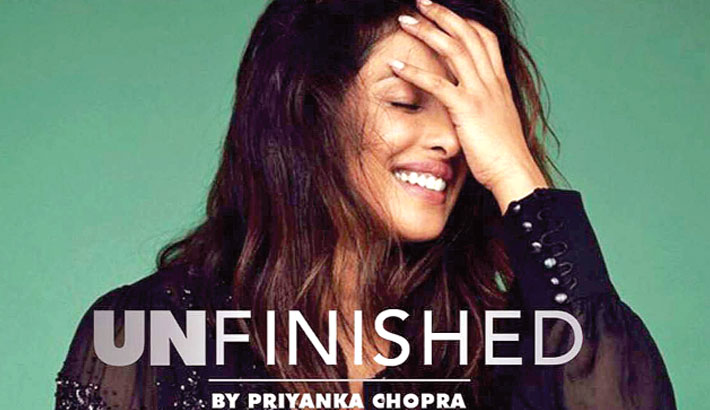 Bollywood actress Priyanka Chopra, who announced her memoir ‘Unfinished’, back in 2018, has finally finished writing it. She took to Twitter to announce the news and said that the book was written after a lot of ‘introspection and reflection into (her) life’, reports Hindustan Times.

“Unfinished is finished! Just about sent in the final manuscript! Wheee! Cannot wait to share it with you all. Every word in my memoir comes from a place of introspection and reflection into my life. #ComingSoon #unfinished,” the actor tweeted.

In June 2018, Priyanka had shared the cover of Unfinished and said that it was always on her ‘bucket list’ to be an author. “The feeling of checking something off your ‘bucket list’ gives you an indescribable sense of accomplishment...and that’s where I am in this moment. I’ve always wanted to write a book, but the timing never felt right. With each opportunity that presented itself, my first instinct was always to wait...because I wasn’t (and I’m still not) finished,” she had written an Instagram post.

She had added, “I wanted to do more, live more, and achieve more, before putting pen to paper and exposing things I’ve always kept private to the world. But looking back on my life as a public person, I’m super proud of what I’ve done and where my life is right now. I’ve realized you don’t have to be finished to tell your story, and that sometimes life’s greatest lessons are taught along the ride...when you’re still figuring things out...when you’re #unfinished.”

Unfinished will be published worldwide by Penguin Random House. During an appearance on The Tonight Show Starring Jimmy Fallon in February last year, Priyanka explained the title. “It’s called Unfinished because there’s so much I want to do with my life, and because I haven’t written it yet,” she said.

Priyanka also said that she was a ‘super private person’ and never expressed her feelings and ‘personal side of things’ in her two-decades-long career. “I think getting married and in the last two or three years, I found my feet a lot more as a woman, as a person, I’m not so insecure. I felt like this was the right time to delve into things before I change my mind and go back into my shell again,” she said.