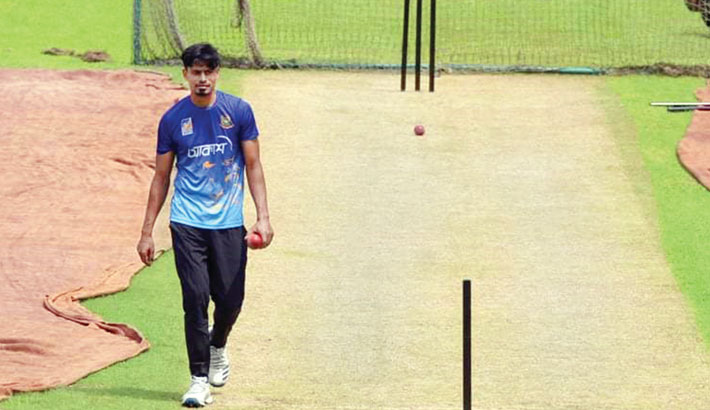 Bangladesh’s left-arm spinner Taijul Islam is seen during a practice session at Sher-e-Bangla National Cricket Stadium in the capital on Tuesday. – SUN PHOTO

Bangladesh’s left-arm spinner Taijul Islam seems to have developed a new bowling action as it was put to show as he started his bowling practice in the nets at Sher-e-Bangla National Cricket Stadium.

Now, he is bowling from close to body unlike the past while his arms look a lot straighter while delivering the balls and the action looks quite similar to Tigers’ present bowling coach Daniel Vettori’s action.

Taijul earlier insisted that he is ready to tweak his bowling action in order to master topspin so that he can be successful abroad.

Daniel Vettori, Bangladesh's spin bowling consultant, had told earlier that Taijul needed to add topspin to his bowling armoury to do well overseas.

Taijul admitted that he is working on the advice given by the legendary left-arm spinner, altering his bowling action a bit for he is keen to learn techniques which will come handy in foreign conditions.

Taijul, who earned a cross-format national contract from the BCB despite being regarded as a Test specialist, hinted at the changes in his bowling action and landing.

“It is a very technical issue and it's not going to be easy for me to explain it. The sidespin benefits our spinners on the turning wickets in our country because it goes either straight or takes a bit of a turn when it lands,” Taijul was quoted earlier

“But, when we play on flat or grassy wickets, topspin becomes very important for us spinners because it gets difficult for batsmen to read which one is coming in and which one is going out and it takes good bounce or flight,” he said.

“I spoke with Vettori and he told me that I am perfect to play games on home soil but I have to learn some more things to be successful abroad because the wickets overseas are either flat or grassy,” he added

“That’s why I have to bring some changes in my bowling action which I am now trying to do. These changes may be minimal and it may effect the action or in the landing,” Taijul concluded.

Taijul has played 29 Tests for Bangladesh, coupled with nine ODIs and two T20Is since making his international debut. He has picked 21 wickets in 10 Tests which he's played abroad while the left-arm spinner has grabbed 93 wickets in just 19 Tests at home.