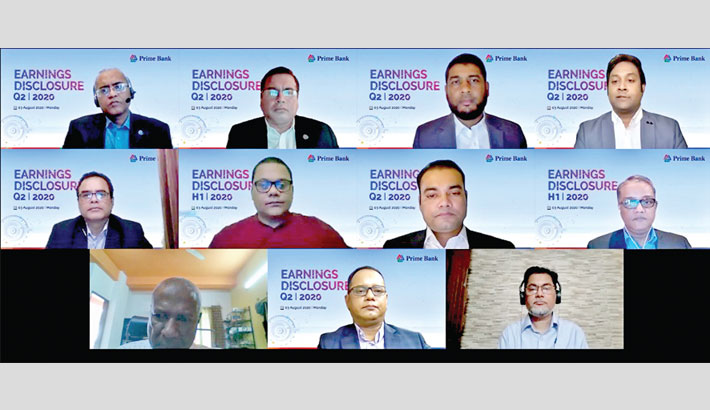 Prime Bank has announced its half yearly financial results of 2020 virtually recently.

The bank has made remarkable progress in key financial indicators including deposit growth, reining in NPL, and achieving best capital to risk weighted assets ratio (CRAR) in Bangladesh banking industry and becoming one of leading performing banks in terms of disbursement under the government’s Covid-19 stimulus package, said a press release.

Earlier this year in its 25th Annual General Meeting, the bank declared 13.50 percent cash dividend for its shareholders for the year 2019.

The bank reported its CRAR at 18.31 percent at the end of H1 2020 which is the highest among private commercial banks in Bangladesh.

The bank’s Return on Equity (ROE) stood at 4.56 percent and Return on Asset (RoA) at 0.38 percent at the end of H1 2020 showing financial stability of the bank.

Prime Bank has so far disbursed Tk 70 crore under the government’s Covid-19 Stimulus Package for MSMEs, which makes it one of the leading performing banks in terms of disbursement under the stimulus package.

The bank’s proactive safeguard measures has earned the bank prestigious international recognition as of the best Covid-19 responders in Asia. The Euromoney’s 'Excellence in Leadership in Asia 2020 Award' is a unique feat for Prime Bank as it is the only bank from South Asia to earn the title in 2020.

The bank has been able to maintain capital adequacy and liquidity position within regulatory threshold and well ahead of industry peers showing stability and robust financial strength. The bank’s strong levels of capital and liquidity continue to protect it in times of uncertainty. Its ongoing digital transformation efforts and significant investments in technology backbone over the last few of years have allowed the bank to provide seamless services to the customers during this difficult time.