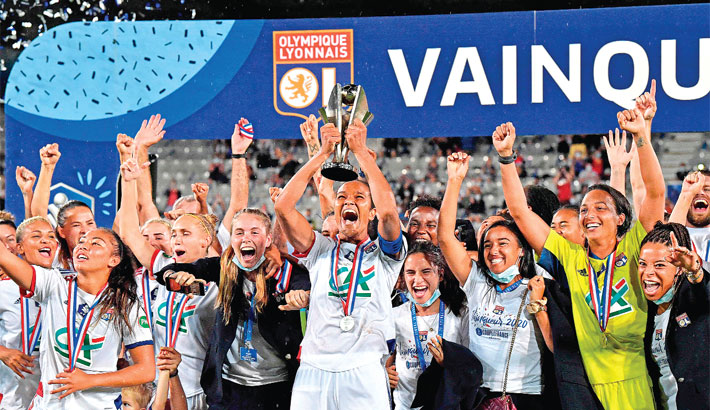 Olympique Lyonnais defender Wendie Renard, centre, lifts the trophy as Lyon players celebrate their victory at the end of their French Cup final against Paris Saint-Germain (PSG) at Abbe-Deschamps Stadium in Auxerre on Sunday. – AFP Photo

Lyon were declared French league champions in May after the season was ended early due to the coronavirus pandemic.

"It was a difficult game after the health crisis, we got back into a high level match, it wasn't easy for both sides," Bouhaddi told broadcaster France TV.

"I work a lot on penalties in training, it got us success tonight, which is the best thing," she added.

The game was halted for 10 minutes in the first half as heavy rain and a storm caused floodlight failure in front of a crowd kept to 5,000 people in Auxerre due to COVID-19 restrictions

In the Champions League quarter-finals, Lyon face Bayern Munich on August 22 in Bilbao while PSG play Arsenal in San Sebastian on the same day.

The two French sides can meet each other again in the final four.