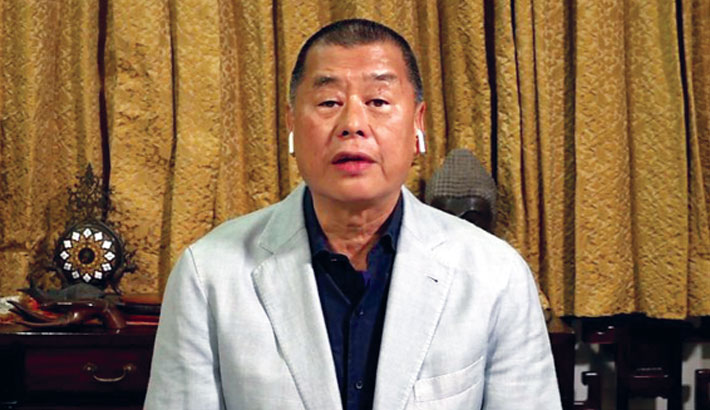 HONG KONG: Hong Kong pro-democracy media tycoon Jimmy Lai was arrested Monday and led in handcuffs through his newspaper office as police raided the building, part of a sweeping crackdown on dissent since China imposed a security law on the city, reports AFP.

Lai, 71, was among nine people detained on charges including colluding with foreign forces—one of the new national security offences—and fraud in an operation targeting his Next Digital publishing group.

It was the latest police operation against dissidents under the sweeping new law introduced at the end of June.

Two of Lai’s sons were among those detained, a police source told AFP as well as Wilson Li, a former pro-democracy activist who describes himself as a freelance videographer working for Britain’s ITV News.

The most serious national security crimes carry up to life in jail. Journalists working at Lai’s Apple Daily broadcasted dramatic footage on Facebook of some 200 police officers conducting the raid, and the newspaper’s chief editor Law Wai-kwong demanding a warrant from officers.

Apple’s staff were ordered to leave their seats and line up so police could check their identities as officers conducted searches across the newsroom. At one point Lai was present, in handcuffs and surrounded by officers.

Police said the search was conducted with a court warrant which was shown to staff.

“This is unprecedented, and would be unimaginable only one or two months ago,” he said. The Foreign Correspondents’ Club, Hong Kong said the raid signalled “a dark new phase” that “upended” previous assurances by China and Hong Kong’s government that the national security law would not end press freedoms.

Chris Patten, the last colonial governor of Hong Kong, accused authorities of carrying out “the most outrageous assault yet on what is left of Hong Kong’s free press”.

The security law was introduced in a bid to quell last year’s huge and often violent pro-democracy protests, and authorities have since wielded their new powers to pursue the city’s democracy camp, sparking criticism from Western nations and sanctions from the United States.

Lai’s Apple Daily and Next Magazine are unapologetically pro-democracy and critical of Beijing.

They are enormously popular but funded almost entirely out of Lai’s pocket because few companies dare advertise with them lest they incur Beijing’s wrath.