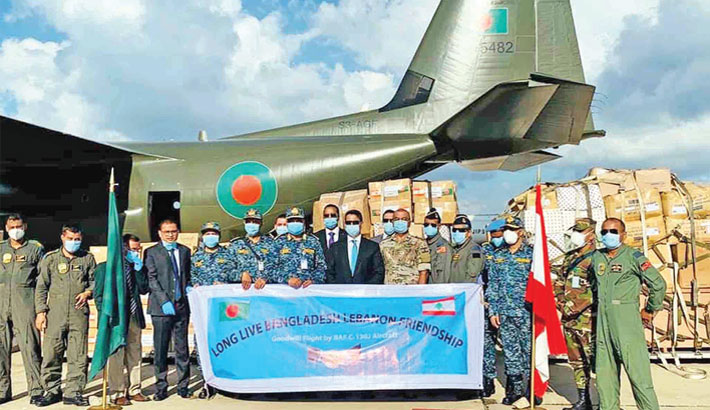 Officials of the armed forces pose for a photo after a BAF aircraft with food items, medicines and medical supplies landed at the Rafic Hariri International Airport in Lebanon on Monday. —ISPR PHOTO

A plane of Bangladesh Air Force (BAF) carrying food items, medicine and medical supplies landed at Beirut in Lebanon on Monday to support the treatment of patients injured by the massive blast on August 4.

The transport aircraft of BAF with nine tons of food items, two tons of medicines and medical supplies landed in Rafic Hariri International Airport, according to a message received from the Bangladesh Embassy in Beirut.

Ambassador of Bangladesh to Lebanon, Maj Gen Md Jahangir Al Mustahidur Rahman handed over the goodwill aid to the nominated local representative of the Lebanese government.

The officials of Lebanese Defense Ministry, UNIFIL and Embassy officials were present during the occasion.

On August 4 at around 6pm, two powerful explosions took place at the port of Beirut in the Lebanese capital. This caused extensive damage to Beirut including the Beirut port and its 10km radius.

Bangladesh Navy’s warship, BNS Bijoy which patrols Lebanese water territory under UNIFIL, was partially damaged in the blast and 21 officers and sailors were injured. Besides, so far 5 Bangladeshi nationals have been killed and more than 100 are injured in the explosion.