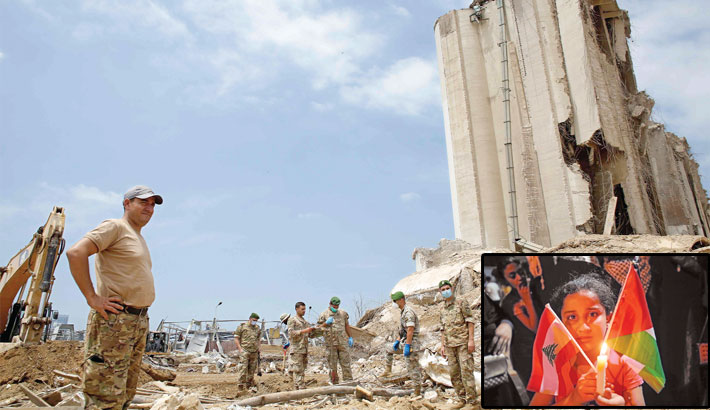 Lebanese soldiers stand at the site of the explosion in the port of Beirut, Lebanon, on Thursday, two days after a massive explosion devastated the Lebanese capital in a disaster that has sparked grief and fury. (Inset), A Palestinian girl carries the national flag and the Lebanese flag during a candle light vigil in Rafah in the southern Gaza Strip on Wednesday. —AFP PHOTO

BEIRUT: People in Beirut have expressed anger at the government over what they say was negligence that led to Tuesday’s huge explosion, reports BBC.

President Michel Aoun said the blast was caused by 2,750 tonnes of ammonium nitrate stored unsafely in a warehouse.

Many have accused the authorities of corruption, neglect and mismanagement.

The blast killed at least 137 people and injured about 5,000 others, while dozens are still missing. A two-week state of emergency has begun. French architect Jean-Marc Bonfils, involved in rebuilding the city after the civil war, and firefighter Sahar Fares, one of the first responders at the scene, were among the first fatalities to be named. A German diplomat was also among the dead.

“Beirut is crying, Beirut is screaming, people are hysterical and people are tired,” filmmaker Jude Chehab told the BBC, calling for the people responsible to face justice. Chadia Elmeouchi Noun, a resident currently in hospital, said: “I’ve known all the time that we are led by incompetent people, incompetent government... But I tell you something - what they have done now is absolutely criminal.”

On Wednesday, the government announced that a number of port officials were placed under house arrest pending an investigation into the explosion.

The country’s Supreme Defence Council insisted that those found responsible would face the “maximum punishment”.

Meanwhile, Amnesty International and Human Rights Watch have called for an independent investigation into the blast. In a statement, HRW said it had “serious concerns about the ability of the Lebanese judiciary to conduct a credible and transparent investigation on its own”.

On Thursday President Emmanuel Macron became the first world leader to visit the country - a former colony of France - since the tragedy. He was mobbed as he walked around the city.

He told crowds he would not let aid go to “corrupt hands”, and promised to call for a “new political pact” from the country’s leaders.

The ammonium nitrate - which is used as a fertiliser in agriculture and as an explosive - had reportedly been in a warehouse in the port for six years after it was unloaded from a ship impounded in 2013.