Shakib: 14 years of acclaim and agony 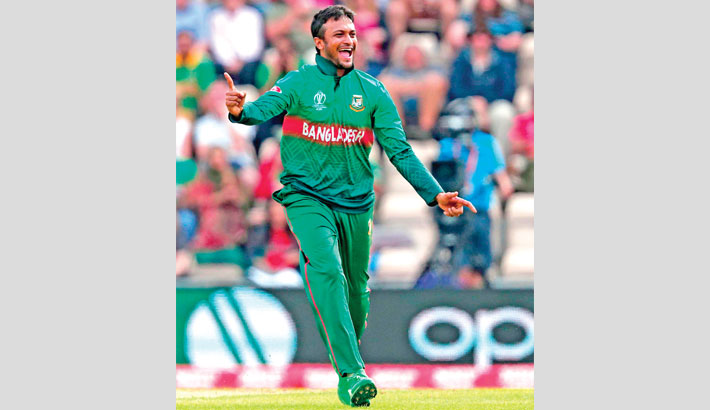 Shakib, who began his journey on August 6 with an ODI against Zimbabwe back in 2006 in Harare, did not take much time to show off his talent and became an important cog of Bangladesh build-up across format bursting into top ODI rankings as an all-rounder within three years of his debut.

He followed the feat by creating history in the next two years stamping his authority in the cricketing world map as he clinched a rare record to become top all-rounder in Tests and T20s along with ODI cricket, a record that is yet to be equaled by anyone else.

During that period his career was full of action with many highs along with the lows which includes getting into trouble with Bangladesh Cricket Board (BCB) on numerous occasions on disciplinary issues and furthermore getting banned by International Cricket Council (ICC) in 2019 for failing to report corrupt approaches by the bookies.

The ban, which is expected to end on October 29, certainly have disgraced him and that too after his stellar performance in the last edition of ICC World Cup, where he scored 606 runs in just eight matches with 11 wickets including a five-wicket haul, was a marked dip in his career.

Over the last 15 years, Shakib’s career has been decorated with a number of records, most of them coming as an all-rounder which includes being the fastest to bag a double of 10,000 runs and take 500 wickets in international cricket.

Shakib insisted that he is not losing his sleep over the title of ‘all-time greatest all-rounder’.

All-rounders are arguably the most precious commodity in cricket as generally cricketers start playing cricket and settle down to become a specialist with either bat or ball and focus on it. Only a few can truly master both the skills and excel in international cricket.

Shakib falls under that rare category and beyond the numbers and the stats, his impact on the national team should also be taken into account as that puts him in the highest echelon among all-rounders.

Before Shakib, Bangladesh were perennial minnows and major underdogs in cricket, but with his entry and ascendance, things took a turn for the better.

The names of Jacques Kallis, Sir Garry Sobers and Imran Khan are mentioned when talking about greatest all-rounders, so let's see how Shakib’s fares against them.

Then there are all-rounders like Ian Botham, Richard Hadlee and Kapil Dev who deserve mention for their exploits and accolades but their stats are less impressive than Shakib's.

Shakib's numbers are impressive and the 33-year-old still has years of cricket left in the tank and more accolades to win.

From the stats, it's easy to say he's the best all-rounder in the game currently, the greatest cricketer Bangladesh has ever produced.

While it would be incorrect to say he's the greatest all-rounder of all time, his numbers suggest that he's right up there with the greats.

“I don’t play to be the best all-rounder of all time. Basically I play for my team and for Bangladesh. As long as I play, I hope to give my best. I want to contribute with batting, bowling and fielding in whatever way I can,” Shakib was quoted in the recent past.

“I don’t think about it at all (about being the all-time greatest all-rounder) but it is true that when my name is put along with those greats, it feels good because it is a huge honour,” he said adding that he regrets making the mistake which forced him to be away from all forms of cricket. He also reiterated his determination to come back stronger than ever.

“One has to be honest. You just can’t lie to the people and pretend. Whatever happened has happened. People are bound to make mistakes. The important thing is how well you can come back from those mistakes,” he said.

“I made mistakes. It shouldn’t have happened. I apologised for it and I want to move forward,” he concluded.