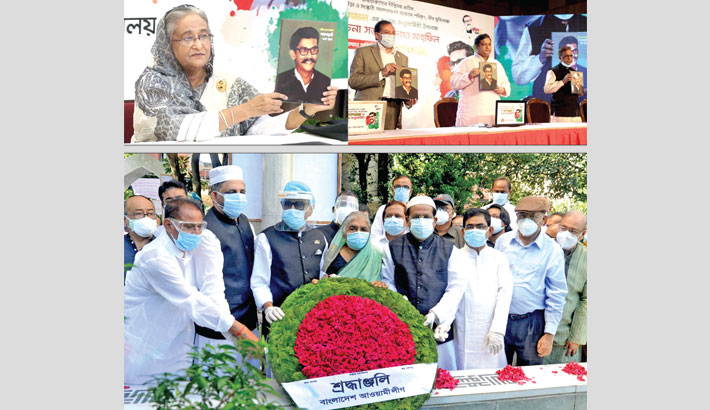 (Top) Prime Minister Sheikh Hasina holds the copy of a book titled ‘Shaheed Sheikh Kamal Alomukhi Ek Pran’ at the launching ceremony of the book, marking the 71st birth anniversary of Bangabandhu’s eldest son Sheikh Kamal organised by the Ministry for Youth and Sports at National Sports Council in the capital on Wednesday. The premier participated in the event from Ganabhaban via video-conferencing. (Bottom) Senior Awami League leaders pay tribute to Sheikh Kamal by laying a wreath at his grave in Banani graveyard. — SUN photo

Bangladesh missions abroad on Wednesday celebrated the 71st birth anniversary of Sheikh Kamal, the eldest son of the Father of the Nation Bangabandhu Sheikh Mujibur Rahman, in a befitting manner.

In observance of the day, Bangladesh Embassies and High Commissions and Consulates across the world chalked out elaborate programmes, including special prayers, discussions on life and works and contribution of Sheikh Kamal.

Bangladesh High Commission in Canberra celebrated the 71st birth anniversary of Sheikh Kamal at its premises. A mourning programme was organised to commemorate the life and works of Sheikh Kamal and a special doa and munajat were also offered for the salvation of his departed soul, said a massage of the high commission.

The Embassy of Bangladesh in Tokyo also observed the birth anniversary of Sheikh Kamal.  The programme started with offering a special prayer in presence of Chargé d’affaires Dr Sahida Akter and officials of the embassy, said a separate massage of the embassy.