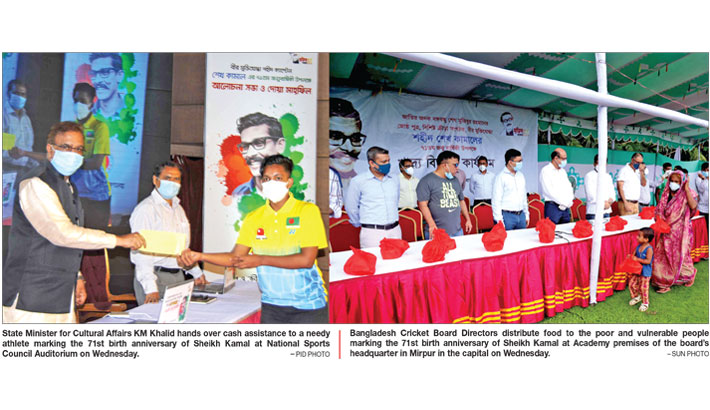 Ministry for Youth and Sports observed the 71st birth anniversary of Sheikh Kamal through a daylong programme on Wednesday.

The sports ministry arranged a virtual discussion on Sheikh Kamal’s life and dua-mahfil at National Sports Council (NSC) Auditorium at 11:00am. A documentary on his life was screened and the cover of souvenir titled ‘Shaheed Sheikh Kamal- Alo mukhi ek pran’ was unveiled during the programme. Prime Minister Sheikh Hasina was present as the chief guest on the occasion.

The sports ministry distributed cash assistance among some needy athletes and sports organisers. Apart from these, the Department of Youth Development has also taken an initiative to plant 1 lakh trees countrywide to celebrate the 71st birth anniversary of Sheikh Kamal. The ministry maintained social distance and strict health measures during these programmes.

Sheikh Kamal was the eldest son of Father of the Nation Bangabandhu Sheikh Mujibur Rahman and younger brother of Prime Minister Sheikh Hasina. He embraced martyrdom on August 15, 1975.

Kamal played a vital role during the liberation war in 1971. He was an organiser of the Mukti Bahini guerrilla war. Kamal received wartime commission in Bangladesh Army and worked as the ADC of General Osmani the Commander-in-Chief of the Mukti Bahini during that time.

Bangladesh Cricket Board (BCB) also observed the birth anniversary of Sheikh Kamal through distributing food to the poor and vulnerable people at BCB Academy premises in the capital.

“Sheikh Kamal helped Bangladesh’s sports arena to create its own identity, introducing modern equipment and inspiring the youth of the country. He single-handedly took Bangladesh’s spots to another level through his creativity and enthusiasm,” BCB President Nazmul Hassan Papon said as he attended the dua-mahfil, organised by BCB.

Apart from the dua-mahfil and Quran recitation, BCB distributed food to the poor and vulnerable people to mark the 71st birthday of Kamal. Social distancing and health measures were maintained strictly during the programme.

Sheikh Kamal founded the country’s prominent sporting club Abahani in 1972. His leadership took Abahani to the top. Dhaka Abahani Ltd celebrated the 71st birth anniversary of its founder through a day-long programme at its premises in Dhanmondi.

The Dhanmondi-based club placed floral wreath before Sheikh Kamal’s portrait at the club premises at 12:01am followed by a day-long Qurankhwani, virtual discussion on his life at 05:00pm and dua-mahfil after the Asr prayers.