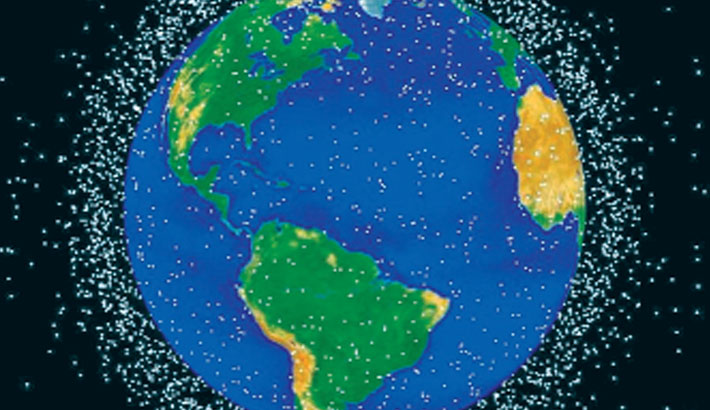 Scientists said Tuesday they had discovered a way to detect space debris even in daylight hours, potentially helping satellites to avoid the ever-growing cloud of junk orbiting the planet, reports AFP. Defunct rockets, satellites and spacecraft parts continue to orbit Earth after they are discarded.
The estimated 500,000 objects circling the globe range in size from a single screw to an entire rocket fuel tank. Travelling at thousands of miles an hour, they pose a huge and rising collision risk to satellites. Using lasers, it is possible to detect the debris from the ground.

But until now this method only worked for a few hours around twilight, when the detection station on Earth is in the dark and the debris still illuminated by the Sun.

A team of researchers based in Austria now think they’ve extended the window in which the space junk is visible using a combination of a telescopic detector and filter to increase the contrast of objects as they appear against the sky during the day.

The team also developed a real-time target detection software system that predicts when certain objects could be observable and used sightings to hone its accuracy.

Overall, the new technique could increase observation times of space junk from Earth from six to 22 hours a day.

Michael Steindorfer, from the Austrian Academy of Sciences Space Research Institute, said the technique, while experimental, should drastically reduce the fraction of sky teams need to search with lasers in order to locate the debris.

“We see our results as a starting point towards increasing the output of the space debris laser ranging community in the near future,” said Steindorfer, lead author of the study published Tuesday in Nature Communications.

He told AFP the technique “could significantly contribute to improving orbital predictions in case of (collision) warnings or for future space debris removal missions.”