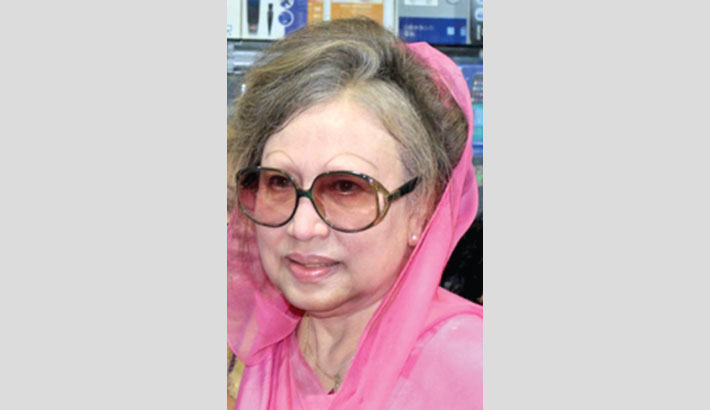 BNP Chairperson Khaleda Zia’s family is likely to submit application, seeking her permanent release from imprisonment or increasing the tenure of her current conditional release, according to the party insiders.

“It is up to her (Khaleda Zia’s) family to decide on submitting application for her release. We have nothing to do in this regard,” BNP standing committee member Nazrul Islam Khan told daily sun on Tuesday.

Mentioning that the party senior leaders met the BNP chairperson at her Gulshan residence in the capital on Saturday, the day of Eid ul-Azha, he said her health condition is not good either.

Asked whether Khaleda Zia would be taken abroad for her better treatment, Nazrul Islam Khan said, “It is not the time to take her abroad as the coronavirus pandemic is prevailing across the world.”

Wishing not to be named, another BNP leader close to the family of the party chief told daily sun Khaleda Zia’s family is likely to submit application to the government in the current month, seeking her permanent release from imprisonment.

Khaleda Zia has been staying in her residence ‘Firoza’ on road number 79 in Gulshan since March 25 this year after she was conditionally released from jail for six months. The party leaders earlier also met her during Eid ul-Fitr as well.

The BNP chairperson was released on March 25 from jail for six months suspending her sentences following an executive order over 25 months after she had been convicted and sent to jail in graft cases.

The government passed the executive order for her release upon two conditions—receiving treatment staying in her Gulshan residence and not leaving the country.

Another central leader of BNP close to Khaleda Zia’s family members said her family members will discuss the issue with her lawyers and then take the decision in this regard immediately as four months of her conditional release from jail are already over and only two months left.

According to lawyers, if her tenure of release is not increased further by the executive order of the government then she has to return to jail again to complete her prison sentence.

The 75-year-old BNP chief, who was undergoing treatment at room number 612 at BSMMU since April 1 last year, returned to her residence after two years, one month and 16 days. She has been staying in isolation almost there during coronavirus pandemic, party sources said.

Khaleda Zia’s family submitted an application to the government in the first week of March seeking an executive order to have her released for her treatment in London.

Her brother Shamim Eskandar, sister Selima Islam, and her (Selima’s) husband Dr Rafiqul Islam also met Prime Minister Sheikh Hasina and made an appeal for her release through the executive order.

Law Minister Annisul Huq at a press conference on March 24 said the government decided to free former prime minister suspending her sentences in two grafts cases as per section 401 (1) of Criminal Code of Procedure (CrPC) for six months.

Earlier, Khaleda’s lawyers made repeated attempts over the last few months to ensure her release through the legal process, but failed to obtain bail even from the Appellate Division of the Supreme Court.

Khaleda was sent to Old Dhaka Central Jail after she had been sentenced to five years’ imprisonment by a special court in the Zia Orphanage Trust corruption case on February 8, 2018. The High Court later raised her punishment to 10 years in the case following an appeal by the Anti-Corruption Commission.

She was admitted to BSMMU on April 1, 2019 following an order of the apex court.