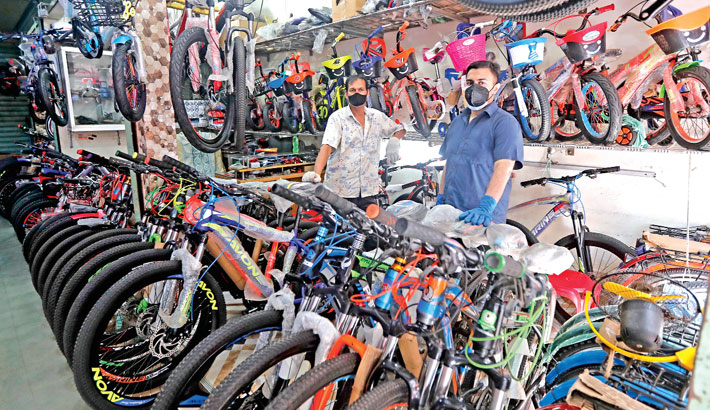 Demand for bicycles has gone up in the country amid the coronavirus outbreak. The photo taken on Tuesday shows two people came to a shop in Old Dhaka’s Bongshal area to buy bicycles. Reaz Ahmed Sumon

Bicycle becomes a popular mode of transport in Bangladesh and elsewhere in the world amid the coronavirus pandemic as many people take the two-wheeler for contactless movement alongside its health benefits.

According to the traders, the sales of cycle at online marketplaces have experienced almost threefold growth month-on-month due to change in people’s lifestyle.

Bangladeshi manufacturers are contributing foreign currencies to the economy exporting bicycles to more than 10 countries, including the United Kingdom, the Netherlands, Denmark, Germany, Austria, Belgium and Germany. Bicycle export has experienced ‘a peak’ recently amid the corona pandemic, according to the exporters.

Meanwhile, introduction of mobile app-based bicycle service in different parts of capital and in some universities across the country has inspired people, especially youths, to take a ride through the tech-enabled service.

Annual market size of the country’s bicycle industry is worth Tk 15 billion of which 30-35 percent comes from local companies, mainly from Meghna Group and Pran-RFL Group, according to the traders.

Official data shows that bicycle export experienced a downward trend year-on-year trading. In the last fiscal year, exporters earned US$ 82.84 million, around 1.4 percent less than US$ 84.24 of the previous fiscal 2018-19.

It is learnt that the earnings from bicycle export also failed to attain annual export target of $85 million for fiscal year 2019-20.

“During the general holidays, sales were low as shops were closed. However, demand for bicycle has increased significantly as people try to avoid public transport and focus on health fitness,” he said.

Physicians mention that cycling is not only a physical exercise but also a decent way to maintain sound health of neuron for mental wellbeing.

Talking to the Daily Sun, chest disease specialist Prof Mohammad Azizur Rahman said cycling is an aerobic exercise which raises heart rate, gets the blood pumping around the body and reduces risk of cardiovascular diseases.

“Cycling at a steady pace burns around 300 calories per hour which helps decrease body fat. Accompanied by a healthy diet, regular cycling will help weight loss,” he added.

Bangladeshi company Jobike has rolled out app-based services in the capital and other parts of the country to bring an environment friendly solution.

“Jobike has created a broadly distributed system in city transportation system with bikes that are more accessible and affordable for all. Jobike aims to build an alternative mode of transportation system for the short-distance commuters and the system is convenient, contactless, affordable and healthy,” Mehedi Reza, chief executive of Jobike, told the Daily Sun.

He claimed that Jobike opens ‘an opportunity’ for an easy, affordable, contactless way to get to work or bus tops, or attend class or reach workplace without dealing with the hassle of parking.

Cycling is a way to attain the environmental goals by reducing emissions to improving air quality and increasing access to transportation options for the commuters in the city, according to Mehedi, a former official of Chinese ecommerce giant Alibaba.