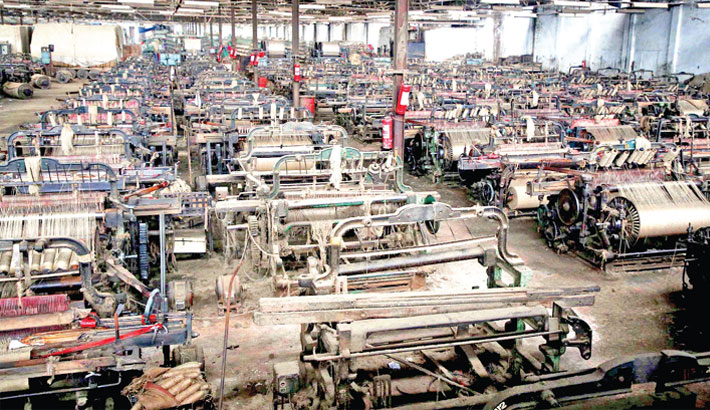 Bangladesh Jute Mills Corporations (BJMC) is not being abolished even though the government has shut down 25 state-owned jute mills and sent home some 25,000 workers with golden handshakes.

The decision raises questions about BJMC’s necessity when the mills are not in operation.

Economic analysts said the decision is not logical at all as the laid-off mills are supposed to reopen on a public-private partnership basis or will be leased out to the private sector, according to government's decision.

They also said it is not fair to keep BJMC as it is since it was the main source of mismanagement and grafts that eventually led to the closure of the state-run jute mills, leaving thousands of workers jobless amid a tough time.

“There is still a necessity of keeping BJMC alive and the media will be informed of the matter very soon,” commented a textile and jute ministry high official in reply to a question.

BJMC was formed in 1972 to operate, monitor and regulate the state-owned jute mills.

Its present Chairman Abdur Rouf defended the decision, saying: “Even if the closed mills are reopened on PPP basis, BJMC’s operations will continue as the government  will have to intervene in case of any problem arises then.”

The regulator will play a vital role in solving any jute sector problems—be it jute selling issue of farmers or be it at the industrial level, he also argued.

About BJMC’s mismanagement issue, the newly appointed chairman said there was a “clear lack of professionalism” in the regulator’s activities since long ago.

Former Adviser to caretaker government Dr AB Mirza Aziz doesn’t find any necessity for BJMC now because the mills won’t be operated by the government anymore.

“I don’t think that it is necessary to keep BJMC alive when jute won’t be under government control,” he pointed out.

“It has been said that production in the shutdown factories will be resumed under PPP, but it is quite uncertain whether or when it will return to production,” he added.

If production resumes, it is very much possible to perform the required duty by only a handful of officials, he also explained.

After the shutdown of 25 state jute mills under BJMC, the government formed a task force to assess total current assets of BJMC with an assessment of movable or immovable assets, unsold jute goods and raw jute in stocks.

According to the latest data, BJMC’s total loss stands at Tk 112.70 billion. Despite income and production loss, new appointments have not stopped at BJMC, raising its workforce’s size regularly.

In reply to a question on whether such a huge workforce will be kept intact for overseeing the closed mills, the BJMC chairman said it is still unclear as no decision with regard this has come.