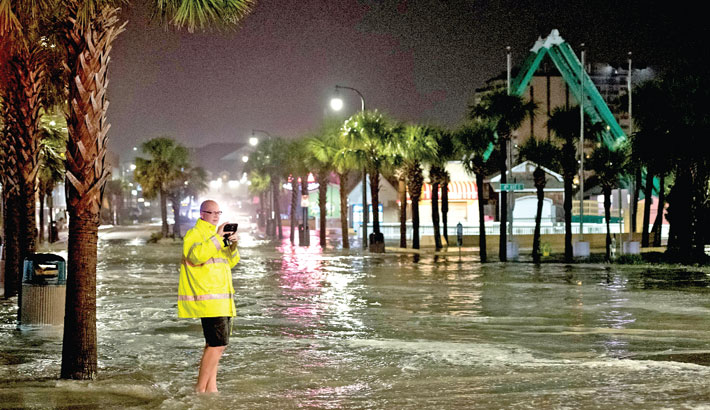 A man uses his phone to record video of floodwaters on Ocean Blvd. Monday in Myrtle Beach, South Carolina. Hurricane Isaias continued to move north along the US eastern seaboard. —AFP PHOTO

Packing sustained winds of 85 miles per hour (around 140 kilometers per hour), the Category 1 hurricane made landfall in the southern part of the state on Monday just before midnight (0400 GMT), the National Hurricane Center said.

Seawater flowed into streets on the border between the Carolinas, leaving locals to wade through the flooded areas as rain and strong winds whipped the palm trees.

Three hours after reaching the coast, Isaias was downgraded to a Tropical Storm, the National, Hurricane Center (NHC) said Tuesday. It is forecast to track up the east coast, with heavy rainfall expected to cause flash flooding through the mid-Atlantic states.

Storm-force winds are expected in Washington, Philadelphia and New York on Tuesday.

A tornado watch was in effect for 30 counties in North Carolina, where state governor Roy Cooper said National Guard soldiers and the Coast Guard were standing by. Utility companies said Monday about 200,000 outages have occurred across the state.

Local authorities reported a number of fires in structures on the south coast and warned people whose houses are flooded to turn off the mains electricity—while not standing in the water.

Santee Cooper, South Carolina’s state-owned utilities company, said more than 6,000 customers had been without power at one point.

President Donald Trump announced earlier Monday he had issued emergency declarations for Florida and both Carolinas, freeing up federal funds.

“Everyone needs to remain vigilant,” he warned during a news conference.

New Jersey Governor Phil Murphy declared a statewide state of emergency ahead of Isaias’s arrival, warning residents to stay off the roads in stormy conditions. The Carolinas have seen a recent surge in coronavirus cases as the US struggles to curb the spread of the illness.

North Carolina governor Roy Cooper said Monday shelters are open and will screen people for COVID-19 symptoms—anyone infected will be sent for isolation out of danger. “I know that Carolinians have had to dig deep in recent months to tap into our strength and resilience during the pandemic and that hasn’t been easy,” he said.