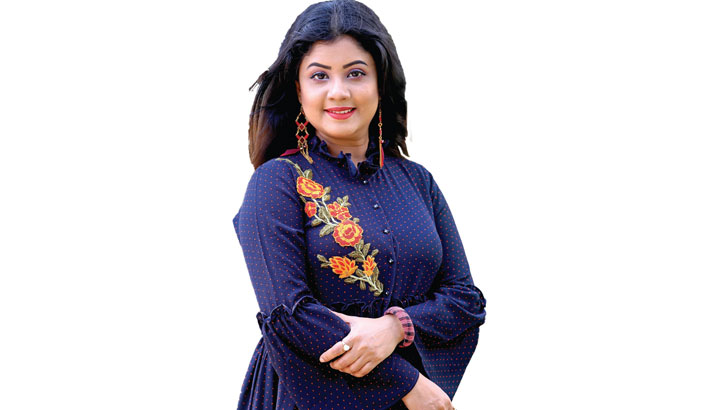 Popular singer Haimanti Rakshit Das has been entertaining the audience for many years with her melodious voice. She has garnered her musical career with numerous hit songs and has won many prestigious awards. The singer has seven music albums to her credit. Her last solo album

‘Deyal Kahini’ was released in 2018. Besides, she did playback over 20 films.

Hailing from Chattogram, Haimanti rose to fame after winning the television reality competition ‘Notun Kuri’ in 1993. Recently, our correspondent Anindita Naheen talked to this singer and tried to explore her current activities and beyond. Here is an excerpt of the conversation.

Where does your musical inspiration come from?

Since my early age, I had a strong wish to become a singer and I have always been inspired by my parents.

I took the music seriously after winning the reality television competition Notun Kuri. My first album ‘Dakpion’ also released in 1996.

What is the most important thing in your musical life?

I’m a musician at heart. Music is my passion and it drives me forward. I want to establish myself purely as a singing artiste.

Who are your favourite musicians?

I’ve many names in my head. Runa Laila, Sabina Yasmin, Syed Abdul Hadi, Subir Nandi, Lata Mangeshkar, Kishore Kumar, Shreya Ghosal and the list goes on. Although,  I’ve always been inspired by Lata Mangeshkar and Runa Laila. They are my idols.

What is your favourite works?

It’s tough to say because all of my songs are like my children. I’ve always given the best effort to each of my songs. Hence, some of my favourites are ‘Barshar Jol’, ‘Ajasra Raat Ajasra Din’, ‘Hridoyer Ainate’ and ‘Chokhe Naki Moner Kotha Bhashe’.

How you are spending your days in corona situation?

I’ve been staying home since March. Honestly speaking, in this time I can give a lot of time on my work. I’ve a small studio in my house and I’m working from there. I’m also participating in different live musical shows and performed music on coronavirus. In the meantime, I’ve published my music on my YouTube channel.

What Eid ventures you have completed and what’s next for you?

I’ve worked on some projects for the upcoming Eid-ul-Azha. I’ve released a new track titled ‘Pakhir Meye’ under HM Voice recently. I also played a duet song with Asif Akbar. I will shoot some music videos for my music album after Eid.

What do you want to say anything to your audience?

I’m so blessed that I am attached to music. I feel good whenever I play music. I would like to tell my fans to stay home and to stay with music. Music is very powerful and very helpful for our mental health. In this hard time, we have to be strong and I believe that bad days will go soon.