Rakhibandhan, a festival of bondage 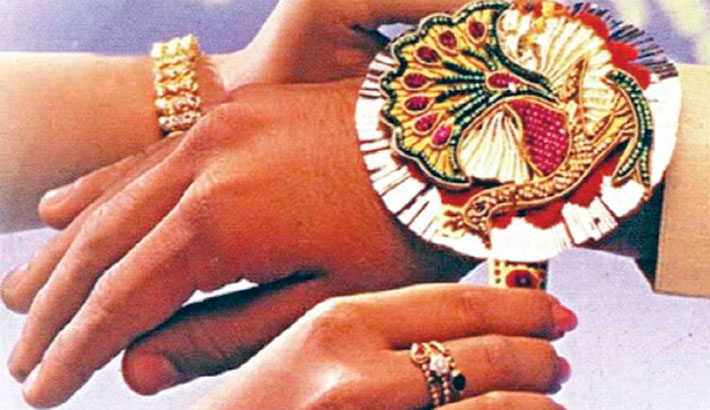 All the objects in the world are intricately tied with one another. Base of this bondage is love, affection and sympathy. Festivals make this bondage more colourful, active, effective and attractive. Any festival carries the theme of affinity and unity among people irrespective of caste and creed. Though mainly family oriented, Rakhibandhan is a festival of that type. The Hindus, Jains and Sikhs celebrate this festival. On this day sisters a tie sacred thread called Rakhi on the wrists of their brothers or grandfathers. It symbolises sister’s love for brother or grandfather and the reverse. Gifts are given by brothers to sisters and brothers swear to protect sisters from any danger for ever. Mutual feeding of sweetmeats are held. Not only children, elders also participate joyfully in this festival. At present celebration of this festival is also spreading among non-Vaishnavs also. Rakhibandhan is also celebrated by different communities in North India.

Etymoligically, Rakhibandhan is a combination of two words – rakhi (Hindi, Urdu, Bengali, Punjabi, a sacred string, mainly red) and bandhan (tying). This festival of tying sacred strings is celebrated on the full moon day of bright fortnight (second half) of Sravan or sometimes in the first half of Bhadra. Time is fixed but as Bengali almanac (lunar year) is followed the date is changed every year. Let us have a look at the dates –

This festival is also known as Jhulanjatra of Sri Krishna and Radha. Jhulan means swing  on a rocking cradle. It is  a festival of Vaishmav sect of the Hindu which iss almost similar to Doljatra or Holi.  It continues for five days, from the eleventh tithi (wZw_,  lunar day) of the bright fortnight of Sravan or Bhadra  upto the full moon day.  For this reason it is also known as Jhulan Purnima. During this festival images of Radha, Krishna and other Vaishnav deities are placed on a swing. Hindu women celebrate the festival with great enthusiasm. There are many melodious Bengali songs on this occasion, e.g. one (duet of Manabendra Mukherjee and Shyamal Mitra) in Bengali film Deya Neya (1963, starring Uttam Kumar, Tanuja, Tarun Kumar, Kamal Mitra) and another in Parineeta (singer – Pratima Banerjee).

Though a family festival, it is not confined to giving and taking gifts within family circle only. It has theological, historical, social and even political implications also. At the beginning of 20th century nationalist movement in Bengal reached its peak which was a matter of serious concern and apprehension to the British rulers. To suppress and uproot this movement the British government played a trick to create a division among the Hindus and Muslims to divide Bengal into two parts (East and West) on the basis of  religion under the camoufladge administrative convenience.

To prevent the partition of Bengal and as a protest Rabindranath Tagore celebrated the Rakhi Bandhan festival. He requested thousands of Hindu and Muslim brothers and sisters from Calcutta, Dhaka and Sylhet to observe this festival. At that time religious intolerance was at its peak in the country but at the call of Rabindranth many people, irrespective of religion, attended to protest against the decision of British government. It was not a traditional religious Rakhibandhan festival but it marked unity among Bengalees. He wrote that famous song ‘O my golden Bengal’ which was accepted as our national anthem in 1972. On  19th July, 1905 Lord Curzon, the then Viceroy to British India, announced the partition of Bengal. In August 1905 a law was passed that came into force on 16th October, 1905 through a gazette notification but.agitation aggainst partition of Bengal continued. Surendra Nath Banerjee was the main leader. After six years, when Lord Hardinge was the viceroy, King George V officially declared the annulment of partition of Bengal.

Mythology informs that Yam (king of death) and Jamuna were brother and sister. Jamuna tied rakhi on Yam’s wrist. In Mahabharat it has been mentioned that in a war Sri Krishna was hurt and his wrist bled. Draupaid, common wife of five Pandav brother, quickly torn the loose end of her sari and bandaged the injury. Krishna was overwhelmed at this. Although Draupadi was not his relative he declared Draupadi as his sister and promised to repay. Some years later, as a consequence of being defeated in a game of dice, when the Kauravs insulted Draupadi and decided to strip her, Sri Krishna preotected Draupadi from being distobed in open court and saved her honour. That loose end of sari is considered as rakhi and it is believed that since then Rakhibandhan was introduced.

Another story informs that Bali (king of demons) was a devotee of Vishnu. Once Vishnu left Vaikuntha to protect the kingdom of Bali. Disguising herself as an ordinary woman Laxmi (wife of Vishnu) came to Bali to take her husband back. She informed Bali that her husband had been missing and requested Bali to shelter Vishnu. Bali agreed with Laxmi. During Shravan Purnima festival Laxmi tied a rakhi on Bali’s hand. Explaining the reason Laxmi introduced herself and narrated everything. Being impressed Bali requested Vishnu to go back to Vaikuntha. Since then sisters celebrate rakhibandhan on the day of Shravan Purnima.

Rakhibandhan also happened in the history of India. Alexander the Great invaded India in 327 BC. His wife Rozana sent a holy thread to King Puru requesting him not to harm Alexander. As a respect to that rakhi Puru did not hurt Alexander in the battlefield. Another anal of Indian history informs that when Sultan Bahadur Shah of Gujarat attacked Chitor in 1535 AD, Queen Karnavati, widow and helpless, sent a rakhi to Mughal Emperor Humayun praying help. Overwhelmed Humayun sent troops to protect Chittor though it was too late and Bahadur Shah conquered the queen’s fort. It is said that on 6 March 1535 Rani Karnavati, alongwith 13,000 maids, performed the Jahar vow and sacrificed herself in the fire to save her honour from Bahadur Shah’s army. Arriving at Chittor, Humayun evicted Bahadur Shah and installed Bikramjit Singh, son of Karnavati, on the throne. Some historians are doubtful about the authenticity of this story but it is mentioned in Rajasthani folklore of mid-seventeenth century.

A story about rakshabandhan has been told in a popular Bollywood film Joy Santoshi Maa (1985). On the day of rakhibandhan Ganesh’s sister tied a rakhi on his hand but Shuvo and Lav, his two sons, became jealous because they had no sister. They insisted for a sister to their father. To satisfy them Ganesh then created a daughter from divine fire and she tied rakhi in the hands of her two brothers. Rakhibandhan is not only a festival tying strings but also of affinity, humanity and unity among people.