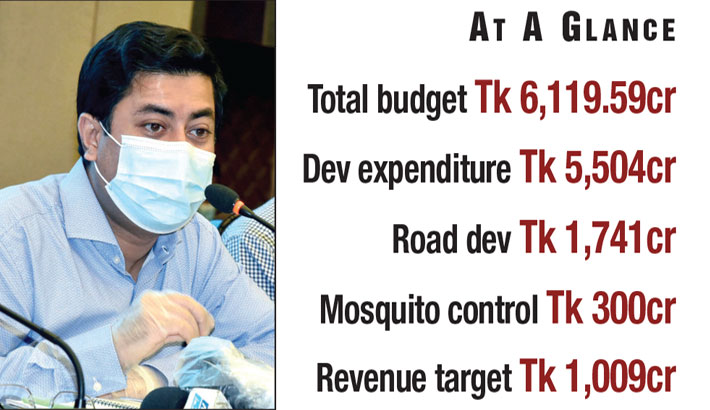 The DSCC mayor declared his maiden budget, which is Tk 2488.19 crore higher than that of the last fiscal year, at Nagar Bhaban in the capital.

The revised budget of the last fiscal year was Tk 2585 crore.

DSCC has also attached special importance to enhancing the entertainment facilities for its residents, allotting Tk 847 crore to the sector.

The city corporation has also kept Tk 150 crore for the renovation of the old channel of the Buriganga River, and Tk 250 crore to recover land along the river and construct roads and parks there.

A total of Tk 300 crore has been allotted for comprehensive mosquito control activities for the first time.

The DSCC has set a target for collecting revenue of Tk 1009 crore while the highest Tk 4916.00 crore will come from government and foreign aid. In his speech, Mayor Taposh said the DSCC wanted to bring canals and water bodies under the city corporation's jurisdiction and if necessary, they want to build walkways and parks along the banks of the water bodies.

He said they have already started the work and the Military Institute of Science and Technology is working as the consulting institution for the project.

"We will also recover all the canals in Dhaka city and will carry out the necessary maintenance work," he said.

Taposh said they will also take initiatives to extend the banks of Buriganga and Shitalakkhya rivers along with making the road communication system more dynamic.

"There are a huge number of water bodies in the city which turned into breeding grounds of mosquitoes. These water bodies have become stagnant due to encroachment and pollution, for which they become curses of us instead of blessings," said the mayor.

About garbage management, the mayor said they have a plan to set up Secondary Transfer Stations (STS) in all of its wards.