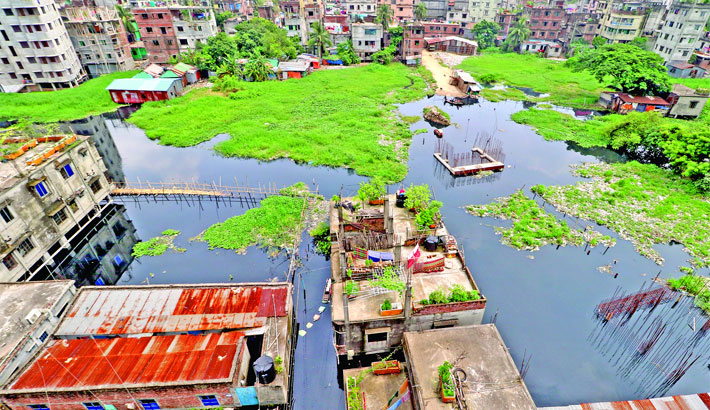 The low-lying areas in the capital’s Bagpara and Basabo have been inundated by floodwater as the rivers surrounding the city are swelling. The photo was taken on Thursday. —Md nasir uddin

The overall flood situation in the central region of the country worsened further with more low-lying areas inundated by upstream water on Thursday.

The flooding in different parts of the country has been aggravated as onrush of upstream water engulfed fresh areas.

Major rivers, including the Padma, the Jamuna and the Brahmaputra, were swelling and flowing downstream on Wednesday, posing a threat to flooding in more low-lying areas of the capital, official sources said.

River water is rushing towards the central region, posing a threat to flooding in new areas.

Many low-lying areas around Dhaka city have been inundated as Balu and Turag rivers and Tangi Khal were flowing above the danger mark at Demra, Mirpur and Tangi points respectively.

Roads, homesteads, fields and open spaces in these areas have gone under 5-8ft floodwater.

Over five million people have so far been marooned in 947 unions under 150 upazilas of 31 districts, according to the National Disaster Response Coordination Centre (NDRRC).

The deluge remained largely unchanged in the northern areas as the water level in Dharla River remained unchanged while the Brahmaputra, Jamuna and Padma drained slowly.

The flood situation will remain more or less the same in the first week of August, said Md Arifuzzaman Bhuiyan of the Flood Forecasting and Warning Centre (FFWC).

The water level of almost all the rivers rose at 41 out of 101 points in the morning, FFWC sources said.

Eighteen major rivers were flowing above the danger mark at 28 stations on Thursday, it added.