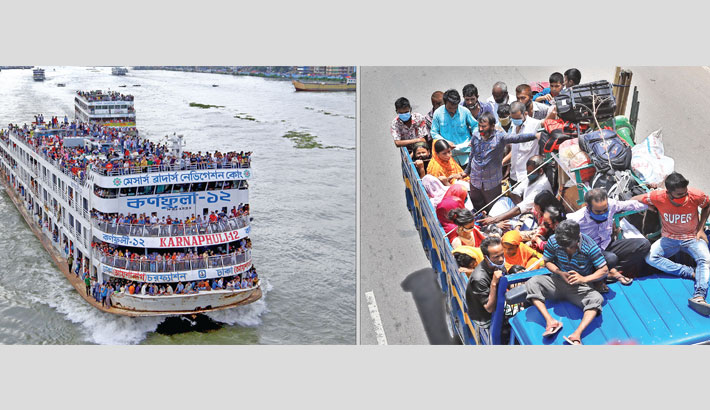 Holidaymakers are making journey for homes by launch (left) and truck (right) for celebrations of the holy Eid-ul-Azha, defying health guidelines amid the coronavirus situation in the country. The photos were taken from Postogola Bridge and Amin Bazar on the outskirts of the capital on Thursday. —SUN PHOTO

People in droves were seen to rush to bus and launch terminals as well as to ferry ghats on Thursday to return home for celebrating Eid ul-Azha with their loved ones.

While the city bus terminals had been witnessing a huge passenger crisis in the last couple of days even at such an auspicious time, there was a sudden rush of crowd in different city bus terminals including Gabtali, Mohakhali and Sayedabad since Thursday morning.

With the arrival of a huge number of home-bound people, severe traffic congestion was created in and around every bus terminal on Thursday, just two days before the Eid festival causing untold sufferings to the commuters, police and terminals sources said.

While visiting the Gabtali bus terminal Thursday noon, a large number of home-bound passengers were seen waiting for hours for bus.

Azizur Rahman, a businessman said he has already sent his family members to their village home.

“Coming to the bus terminal I came to see a huge crowd. Bus ticket was also not available.”

Most of the counter staff said tickets have been sold. Some tickets are being sold on black markets at higher price, he alleged.

Since earlier, many people have decided not to leave Dhaka during the Eid ul-Azha holidays amid coronavirus pandemic.

On the other hand, thousands of homebound passengers thronged Kanthalbari-Shimulia and Paturia-Daulatdia ferry ghats to avail ferries creating a huge jam on both sides of ferry ghats. With the passage of time, the queue of waiting passengers is turning further long.

At around 12noon on Thursday, it was seen more than 2,000 vehicles were waiting to cross the river through ferries at Kanthalbari-Shimulia area, ghat sources said.

Though the ferry movement was hampered for some time due to strong current, everything was under control, he said.

Moreover, a mobile court and a permanent medical team are working round the clock to give service to the homebound passengers.

Rampaging through Bangladesh at an alarming rate, the novel coronavirus epidemic has forced thousands of Eid-holidaymakers to ditch plans to leave the capital for their home towns and villages in a bid to keep their loved ones safe.

In addition to the fear of coronavirus infection, economic hardship and flooding in large parts of country have added to people’s woes during this Eid.

No crowd of passengers was seen in Kamalapur Railway Station. There is no passenger pressure at railway stations or launch terminals to get the much sought-after advance tickets like other years ahead of Eid, the authorities said.

The pandemic has forced many low-wage earners to leave Dhaka in June and July.

Around 300,000 people have already left Dhaka since the pandemic broke out in Bangladesh. They started to leave Dhaka during the lockdown which was designed to curb the spread of coronavirus.

Many left the city before Eid ul-Fitr and most of them are unlikely return to Dhaka any time soon.