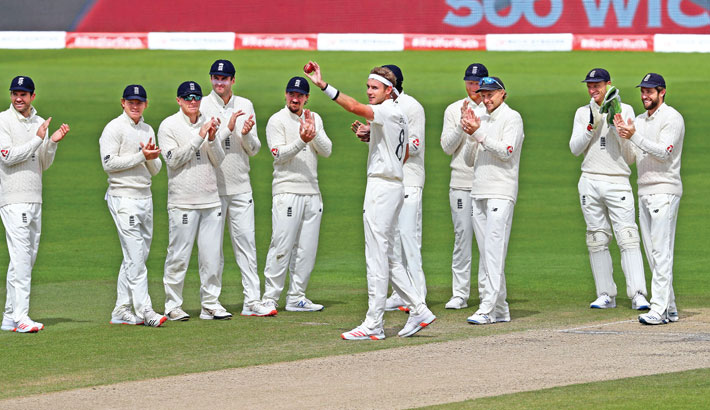 England’s Stuart Broad, centre, waves as he celebrates after taking the wicket of West Indies’ Kraigg Brathwaite, his 500th wicket, on the final day of their third Test at Old Trafford in Manchester on Tuesday. – AFP Photo

England's Stuart Broad joined one of cricket's most exclusive clubs when he took his 500th Test wicket on Tuesday.

The 34-year-old paceman became just the seventh bowler to reach the landmark when he had West Indies opener Kraigg Brathwaite plumb lbw for 19 at Old Trafford on the fifth and final day of the third Test, with England pushing for a victory that would see them take the series 2-1.

Broad, playing in his 140th Test, had been left stranded on 499 wickets when, after he had already taken eight wickets in this match, rain washed out the whole of Monday's fourth day.

He was then frustrated by some sound batting early Tuesday before a fresh burst of rain forced the players off the field for some 16 minutes. But soon after play resumed, Broad reached the 500-mark when he dismissed Brathwaite with a full-length delivery that struck the back pad, with the opener not even bothering to review umpire Michael Gough's decision because he was so clearly out.

Brathwaite's exit left the West Indies chasing a huge target of 399 for victory, 45-3.

Broad, controversially omitted from the England side that lost the first Test at Southampton by four wickets, had now taken the first three West Indies wickets to fall in their second innings of this match.

But any thought he might match England spin great Jim Laker's feat of taking all 10 wickets in an innings of an Old Trafford Test, against Australia in 1956, ended soon afterwards when he caught Shai Hope off Chris Woakes to leave West Indies' floundering at 71-4.

Broad had already taken 6-31 in West Indies' meagre first innings 197 made in reply to England's 369. Broad scored a dashing 62 runs in that innings, batting at No 10.

Although no spectators are allowed to attend in a bio-secure series that marks international cricket's return from the coronavirus, Broad's father Chris -- a former England opening batsman -- was at Old Trafford to witness his son's achievement in his role as the match referee.

The only bowlers with more than 600 Test wickets are a trio of former spinners -- Sri Lanka's Muttiah Muralitharan (800), Australian Shane Warne (708) and India's Anil Kumble (619). The only seamers ahead of Broad are Anderson (589 wickets) and Australia's Glenn McGrath (563) and the West Indies' Courtney Walsh (519), both of whom are retired.