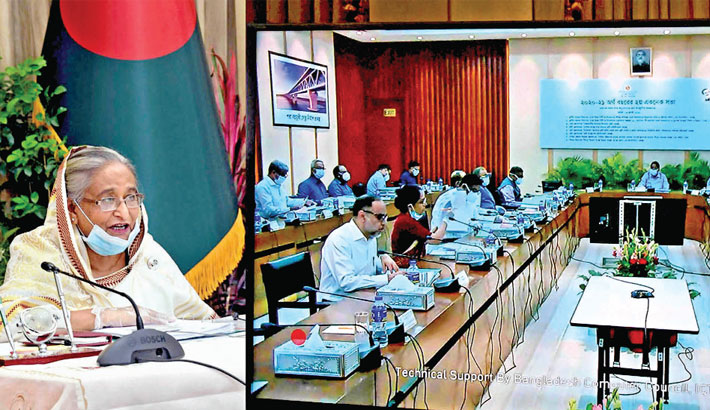 Prime Minister Sheikh Hasina presides over a meeting of the Executive Committee of the National Economic Council (ECNEC) at NEC conference room at Sher-e-Bangla Nagar in the capital on Tuesday.

The approval came at the Ecnec meeting that was held on a virtual platform with Prime Minister Sheikh Hasina in the chair, who joined the meeting from Ganobhaban.

Out of the two approved agriculture projects, the key scheme was ‘Agriculture mechanisation through coordinated management,’ which will be implemented at a cost of Tk 30.20 billion in all the upazilas under 64 districts.

Under the scheme, modern harvesting and seed plantation machinery will be distributed among the farmers alongside providing necessary training with regard to use of these machinery.

Its major objectives include prevention of 10-15 percent crop wastage due to old farm practices and saving time and money by 50 percent and 20 percent respectively.

“There is no alternative to mechanisation of our agriculture. If we want to make progress we’ve to modernise our old agricultural system. So, the project has been approved,” Planning Minister MA Mannan told reporters at an online post-meeting press briefing.

The government will provide agricultural machinery to farmers of haor areas at 70 percent subsidised cost while the rate of subsidy will be 50 percent in other areas, he informed.

Department of Agricultural Extension (DAE) will implement the project across the country by June 2025.

DAE will also provide trainings to rural mechanics, agriculture officers, farmers and entrepreneurs on the machine maintenance and better farming.  While approving it, the Prime Minister directed for examining quality of the locally produced agricultural machinery and the government will promote local ones if these are found good, Mannan said, quoting the PM.

Ecnec also approved another project titled ‘Increasing Production of Oil-Bearing Crops Project’ involving Tk 2.78 billion under the agriculture ministry aiming to meet the local demand of edible oil and reduce the import costs in this regard.

Including these tow, the Ecnec meeting approved a total of eight projects of five ministries, MA Mannan told reporters.

Total cost of the projects is Tk 101.02.03 billion of which Tk 100.69 billion will be borne from the state coffer, while the remaining Tk 331.3 million will come from the project implementing organisations own funds, he informed.

Besides two agriculture ministry projects, the approved projects include two from Local Government Division, two from the ministry of land and one each of the Chittagong Hill Tracts affairs ministry and the Power Division.

The second revision to a infrastructure development project for Dhaka North city was cleared, while a new project for improving roads and drainage systems of 18 new wards of Dhaka North City Corporation (DNCC) got approval at a cost of Tk 40.26 billion.