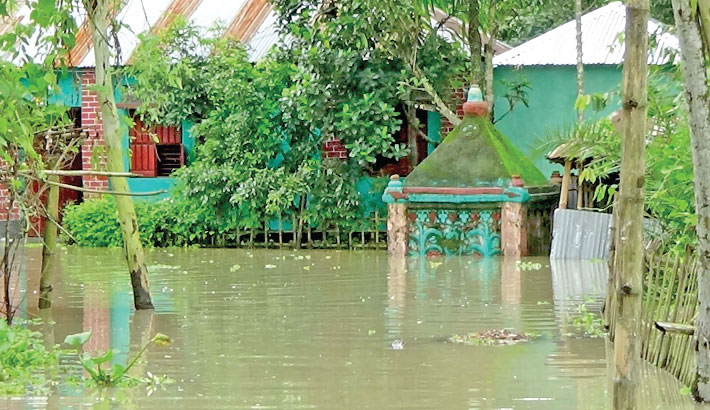 Many low-lying areas of Lalmonirhat district has been inundated by floodwater. The photo was taken on Monday. — Sun Photo

RANGPUR: The flood situation deteriorated in eight northern districts marooning some three lakh people following continuous onrush of water from the upstream inundating fresh areas during the last 24 hours ending at 9 am in the Brahmaputra basin.

Officials of Bangladesh Water Development Board (BWDB) said major rivers were flowing above danger marks (DM) at 11 points of Nilphamari, Lalmonirhat, Kurigram, Gaibandha, Jamalpur, Bogura and Sirajganj districts at 9 am on Monday.

The Jamuna was flowing 62cm above the DM at Fulchhari in Gaibandha, 57cm at Bahadurabad in Jamalpur, 42cm at Sariakandi in Bogura, 28cm at Kazipur and 6cm at Sirajganj points in Sirajganj districts at 9 am.

Following further rises in its water levels during the period, the Teesta was flowing above the DM by 44cm at Dalia point in Nilphamari and 8cm above the DM at Kawnia point in Rangpur at 9 am on Monday.

Talking to the agency, Executive Engineer of the Teesta Barrage Project (TBP) division of BWDB Rabiul Islam said the Teesta was flowing 55cm above the DM at Dalia point at 12 on Sunday night.

“However, the Teesta was flowing above the DM by 52cm at 6 am and 44cm at 9 am at Dalia point on Monday,” he said, adding that the falling trend in water level of the river might continue during the next 24 hours.

Talking to the agency on Monday, Chief Engineer for Rangpur Zone of BWDB Jyoti Prosad Ghosh said water levels of the Teesta and Dharla might start receding in Rangpur, Lalmonirhat and Nilphamari districts the next 24 hours.

He visited the TBP, its flood bypass structure and adjoining areas in Nilphamari and adjoining Lalmonirhat to monitor the flood situation and safety of flood control structures from 1am to 5am on Monday.

“I am visiting flood-hit areas alongside the rivers Dharla and Brahmaputra in Kurigram on Monday,” Ghosh said, adding that all flood control embankments and structures are remaining safe under Rangpur zone of BWDB in Rangpur division.

Meanwhile, the government has launched relief operations as the second phase of deluge exposed thousands of people to sufferings following inundation of vast low-lying areas in the affected districts in the Brahmaputra basin.