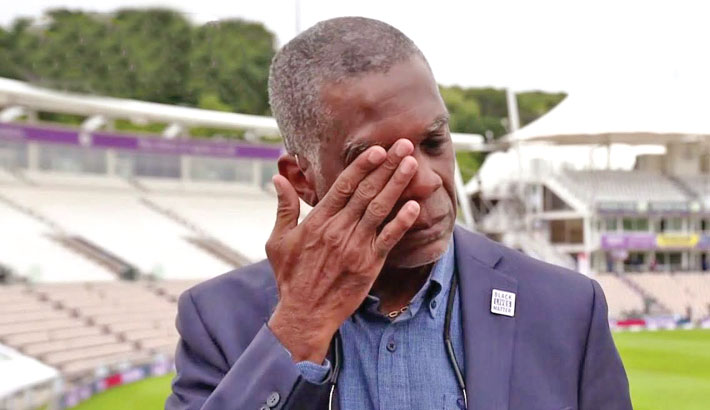 Though West Indies winning the opening Test of the series in English soil is itself a really important development, it has a gained special importance for another reason as cricketers from both teams took to the field wearing ‘Black Lives Matter’ written in their jerseys to commemorate the murder of George Floyd in USA.

As international cricket returned to the field with this series after coronavirus started spreading, this series was the centre of focus of every cricket fan in the world. West Indies won the first Test of the series in England, leaving behind five days of fierce fighting, excitement and even frustration.

The cricketers along with umpires of both the teams knelt down in support of the ‘Black Lives Matter’ movement before the match. A white police officer knelt on Floyd's neck for almost eight minutes which caused Floyd’s death and once again raised the festering sores of racism starting from USA and then to the entire world. It has also had its effect on cricket as well. The players expressing their solidarity with the movement during the Test was a clear sign of the effect of the movement. Michael Holding, sitting in Southampton's commentary box, said the Test between England and the West Indies is the most-watched match at the moment. Because no cricket match is going on at this time, the spectators are not able to enter the field. Sitting in front of the television, everyone's eyes may be here now.

During the series, Michael Holding broke down in tears while recalling the racist acts he had to go through during his lifetime. The Caribbean legend could no longer restrain himself from speaking up about his childhood and what his parents went through.

“Whenever I talk about my parents, I get emotional. That is still happening. Mark (moderator) I know what my parents went through. No one in mother’s house would talk to my mother because my father was black,” Holding said.

“I know what they went through and this thing happened to me. I know it's a slow process. Yet I am hopeful that everything will get back on track. Even if it's at the speed of a snail, I don't have a problem,” Holding added while wiping of his tears.

West Indies won the first Test by 4 wickets. Overcoming various obstacles, the visitors touched the target of 200 runs in the last session. Despite losing three wickets for 27 runs, Blackwood's 95-run innings helped Jason Holder's team to the port of victory. Gabriel took 4 wickets in the first innings and 5-wicket haul in the second innings.