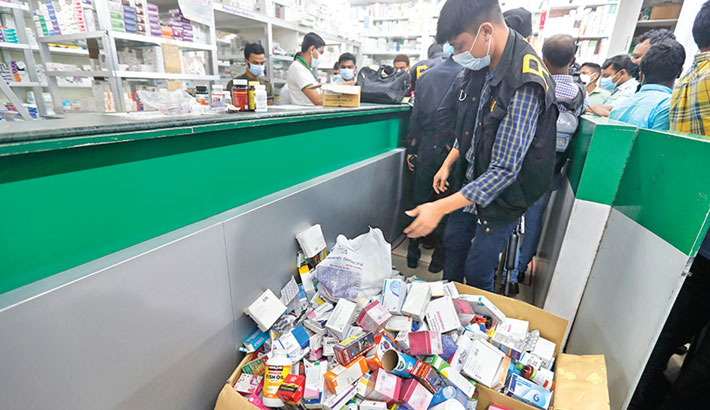 A mobile court run by Rapid Action Battalion (Rab) seizes a large quantity of banned and date-expired medicine during a drive at Kakrail branch of Lazz Pharma Ltd in the capital on Monday. — Reaz Ahmed Sumon

Rapid Action Battalion (Rab) and the Directorate General of Drug Administration (DGDA) launched a joint drive in the capital’s Kakrail branch of Lazz Pharma on the basis of complaints from buyers.

There are also allegations against Lazz Pharma for selling drugs at high prices and importing drugs without following due process.

During the drive, Lazz Pharma authorities failed to show any valid documents for the seized drugs. It is believed that the drugs were brought to the country illegally from abroad.

Palash Kumar Basu said, “During the drive, we found that the medicines, which Lazz Pharma of Kakrail Branch was selling for various diseases, have no permission to import.”

“Besides, we have found huge expired drug, including injection, from the medicine store,” he added.

He said, “We have seized 76 types of unauthorised drug and expired drug, including injection, worth Tk 5 million. The trade licence of the store also expired.”

It was later learnt that these drugs were supplied to renowned pharmacies, including Lazz Pharma and Tamanna Pharma, in the capital.

Subsequently, a large quantity of counterfeit drugs was recovered from Lazz Pharma and Tamanna Pharma.