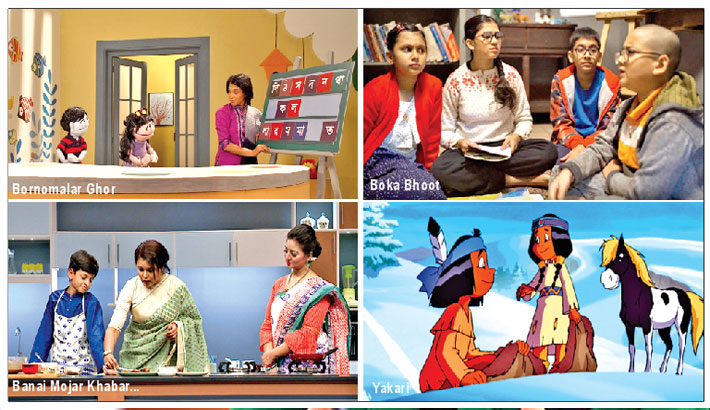 Duronto TV, a popular channel for kids and family, will start airing its 12th season from tomorrow. The new season will feature four new programmes and three new cartoon series.

A new programme on learning alphabets titled ‘Bornomalar Ghor’ will be aired from Sunday to Thursday at 10.00am and 08:30pm from July 12. This is a puppet series which is about a family of puppets and the people surrounding them. The series features alphabet lessons through regular activities.

Actors in this series include Syed Hasan Imam, Chitralekha Guha, Ananda Khaled, Shajal and Roksana Ruma among others. The programme has been produced by Partha Pratim Haldar and Jamal Hossain Abir.  The puppets were made by Khaled Hasan Rumi, Meherunnesa Choto and Sayma Karim.

‘Banai Mojar Khabar, Ma-Baba ar Ami’, a cooking show for children, will air from Sunday to Thursday at 02:30pm from 12th July. Hosted by Chef Annie Reshma, the show will feature renowned personalities, along with their children, in each episode. The programme has been produced by Fahima Ahmed Chaity and Amina Nowshin Raisa.

‘Rong Beronger Golpo’, feature muppet characters Halum, Tuktuki, Ikri and Shiku, will be broadcast every day at 05:30pm and 09.00pm from July 12. The programme is made with pictures from story books. Produced by Mehedi Hasan Shadhin, the episodes are designed to describe the stories through characters and dubbed by voice artistes.

‘Pororo’ is an animated series about a bunch of animal friends who live in a remote and snowy village. This series revolves around the adventures of Pororo and his friend who encounter with challenges and learn practical lessons. The series will air Sunday to Thursday at 11.00am and 06.00pm from July 12.

Besides, the regular programmes include Sisimpur, B te Bondhu (Series 2), Ronger Khelay Shurer Bhelay (Series 2), Khoka Thekey Bangabondhu and Mecho Tota Gecho Bhoot. The regular cartoon series include The Ugly Duckling and Me, Heidi, The Jungle Book, The Garfield Show, Maya the Bee, Bob the Builder and Little Monsters and Minuscule.