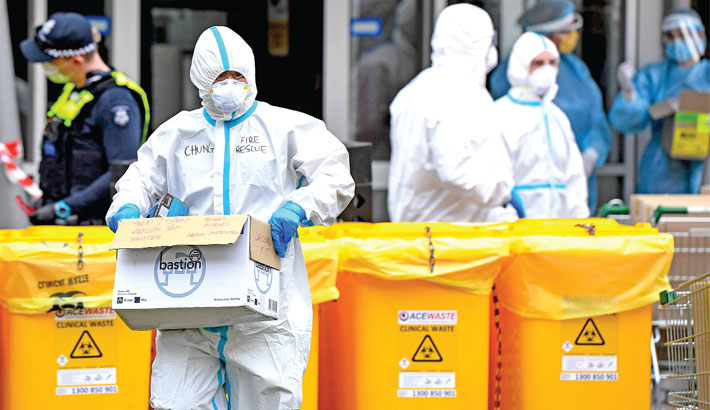 Members of the Melbourne Fire Brigade (MFB) prepare to take food parcels to residents in a locked-down public housing estate in Melbourne on Thursday as the city re-enters a city wide lockdown after a fresh outbreak of the coronavirus. —AFP PHOTO

Residents have been told to stay at home for six weeks after other measures to contain a spike in COVID-19 failed to prevent the virus spreading.

The state of Victoria, which announced a further 165 new cases Thursday, has been effectively sealed off in an effort to preserve the rest of Australia’s success in curbing the virus.

However, a rush of travellers across the border into neighbouring New South Wales on Wednesday has raised concerns those efforts could be torpedoed. Police said about 30,000 cars made the crossing in less than 36 hours.

“A few cases coming over the border from Victoria (can) tip that magic number into outbreaks that are going to be very hard to control,” epidemiologist Mary-Louise McLaws told public broadcaster ABC. New South Wales Premier Gladys Berejiklian said two cases of COVID-19 had been identified in the border town of Albury and she warned against travel to or from communities on the state frontier. “We want to make sure we’re flushing out any potential seeding that occurred prior to that spike in cases becoming evident,” she told reporters in Sydney.

Queensland state announced Thursday it would turn away all travellers from Victoria—removing an option that had allowed them to spend 14 days in quarantine on arrival.

In Melbourne, there are concerns over the economic and mental health impacts of the second lockdown, which officials estimate will cost the economy Aus$6 billion ($4.2 billion).

Restaurants and cafes are limited to serving takeaway food, while gyms, beauty salons and cinemas have been forced to close again.

Residents are restricted to their homes except for work, exercise, medical care or to buy essentials.

Despite the harsh measures, many said they support the restrictions.

“I think it is a very good thing,” resident Don Sherman told AFP.

“Everybody has to be aware of their rights and what they have to be (doing) in this critical situation.”

Authorities on Thursday eased a controversial “hard lockdown” of a high-rise public housing estate, where roughly 3,000 people spent five days confined to their apartments amid fears the virus had spread across the towers.

Health officials said just one of the nine towers would remain subject to Australia’s harshest isolation after it was found that most of the 111 residents who tested positive lived in a single building.

Victoria Premier Daniel Andrews said it was a “difficult” decision to keep the one tower’s residents in lockdown but was part of a strategy to “try and drive down numbers”. “That is an abundance-of-caution approach that not only protects the welfare and the wellbeing, the health of all of those residents, but also protects public health as well,” he told a press conference. New cases were also detected among staff at several hospitals and aged care facilities in the city Thursday, sparking concerns for the sick and elderly patients.

Melbourne resident Monica Marshall said the most difficult part of the new lockdown was being separated from her 91-year-old mother, who recently entered a care home. “The idea of not being able to see people that you love and care for is really distressing, really distressing,” she told AFP through tears.

“I hope that people have got the message that they really need to take notice—it’s very disconcerting watching some people on the news where they really don’t care.”

Government workers are going door-to-door in Melbourne urging residents to get tested for the virus, with officials saying about 10,000 people have refused after being influenced by online disinformation.

Australia has recorded just over 9,000 cases of COVID-19 among a population of 25 million, with 106 deaths.

Outside of Victoria, the country has seen few new infections, with most cases involving returned international travellers in hotel quarantine.