Why does God allow sufferings? 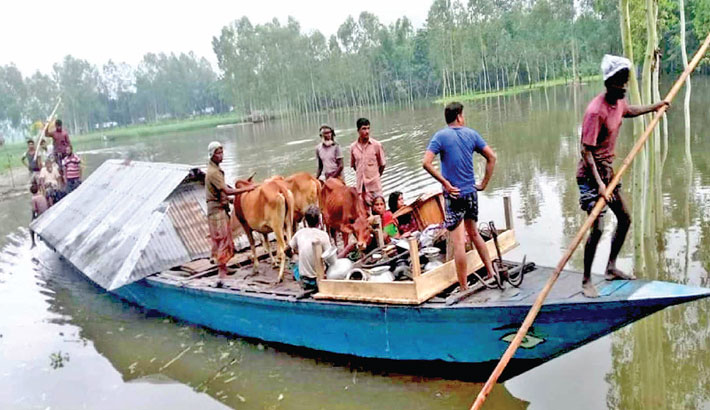 Ours is not a perfect world. This is a fallen world. The fall of the first man and woman, Adam and Eve, has taken the perfect condition away. This is done, according to our belief, by Satan. Diseases, disasters, destruction, death and dominion of the devil prevail in all lives. There is joys, happiness, pleasure, for sure. We enjoy life and are to enjoy it to the fullest limit possible. This is God’s greatest gift for us. We can better think of life only when we think about it against what we call death! But often it appears that life is for most of its part dominated by sufferings of so many kinds caused by man-made conflicts and natural disasters. Coronavirus kills thousands of people daily: young, old, children and all are fallen victims to this plague all over the human society.

Our cardinal tenet of faith is ‘God is good’! He is sovereign and all-powerful and all-merciful. So, why does God allow sufferings to take place? Especially it is too hard to reconcile such attributes of God with so much innocent sufferings people are suffering untold miseries and indescribable sufferings. How can God be good if millions die at the hands of despots and tyrants? Why innocent children and women and simpleton people have to die because of wars and famines caused by unscrupulous humans. Deuteronomy 29:29 says, “The secret things belong to our LORD God, but the things revealed to us and to our children forever, that we may follow all the words of this law.” However, we seek the guidance and empowerment of the Holy Spirit to medidate upon discerns what God’s life-giving Word has to teach us.

Evil exists. It exists in a dominating way. There is natural evil manifesting in diseases, death, destructions. Such as, the plague in the early 19th century caused the death of about 100 million people in America. That’s one of hundreds of plagues and pestilences that caused untold miseries to mankind.  It is pertinent to quote Romans 8:22, “We know that the whole creation has been groaning as in the pains of childbirth right up to the present time.”

There is moral evil. Every human heart is characterized by evil. Romans 3:10-18 declare, “There is no one righteous, not even one; there is no one who understands, no one who seeks God. All have turned away, they have together becomes worthless; there is no one who does well, not even one.” Their throats are open graves; their tongues practice deceit. The poison of vipers is on their lips. Their mouths are full of cursing and bitterness. Their feet are swifts to shed blood; ruin and misery mark their ways, and they ways of peace they do not know. There are no fears of God before their eyes.” There is supernatural evil in our world. The most ancient book of Job in the Old Testament describes the innocent suffering of Job. Job was blameless, upright, God fearing and shunning evil all his life. Satan killed all his ten children and their children, destroyed all their wealth of whatever kind. Job was turned to be the most miserable human being on earth, once wise, rich and noble man in all the Eastern part of the world of his time. God allowed Satan to test his faithfulness and devotion to God. Miseries after miseries befell him. His condition was so beyond description that he even cursed his day of birth! (Job3).  But Job remained faithful to God and trusted on him although he argued that he did not do anything that would deserve him such extraordinarily pitiful condition. God’s word prevailed that his servant would not sin against God. To cut the story short, God eventually rewarded his servant Job with double blessings. For the authentic believer in God tests, trials and afflictions are never to be seen as strange things. These are the ways God tests his faithful followers. But he rewards them in the end for their faithfulness for the right cause. We do not fight flesh and blood merely, but we have to fight the elemental powers, whose destructive powers are pervasive and dominating.

God is not the creator of evil. But he takes responsibility of delivering people from evil, people who love him and call on him. God wills evil to operate. He gave man the freedom to choose between good and bad. But God knows that evil in the end will be ended. His will for the good of his faithful ones will vindicate them and glorify His holy name eventually. We praise God because what God has done to overcome evil.

Even God speaks to people from darkness. Righteousness of God revealed the evil. He demonstrated his wrath Romans 9:22 to glorify him. Acts of the Apostles 2: the crucifixion of Christ was the cruelest act planned by God to reveal his grace for sinful man. Acts of the Apostles 4:7; Job 3:8; 42:5. People hated him without a cause: sinless Jesus suffered the death on the Cross for our sins. Innocent sufferings are commonplace occurrences in our world are testified to by scriptures, such as Psalm 35: 19, 69:4; John 15:25. People are jealous of other people.

God is the Creator, Designer, Revealer and comforter. Our wrong choice and the abuse of free-will lead to suffering. But God takes responsibility in His love to save us. So Jesus innocently suffered for our deliverance. Romans 8:18. And in the end the author of all evil, all sufferings will be eternally banished (Revelations 21:1-4).

But why the innocents suffer? God has a higher purpose than man can understand The story of the man  born blind as narrated in the New Testament  (in John 9:1-3) has a lesson to tell. But this must not be interpreted as a story to teach us that God glories in human miseries.

Nobody is without sin. (Romans 3: 9ff.).  We are born with the sin nature that we have inherited from our first parents. We have the capacity to actually sin though we may not commit any sin. But we have with us the sin nature, i.e. the potency to commit sin whether we actually do sin or not. This is the doctrine of Original sin. Roman 3:23; 8:22; John 16:33.

The writer is a Christian Theology teacher