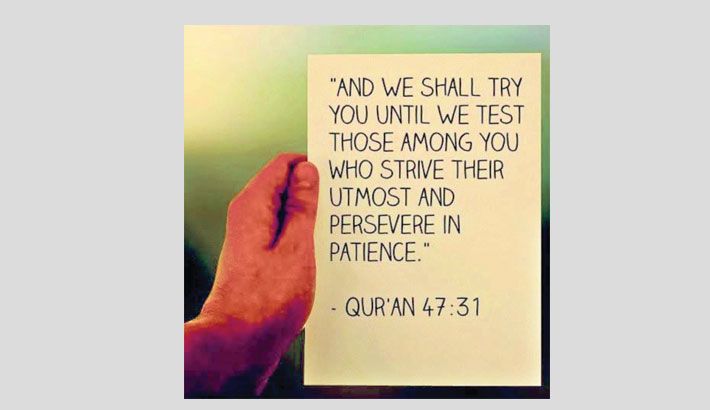 In hardships and calamities, it is natural to get swept away by the affliction of the moment. During such trials of faith, unless we are careful, Satan can inject fear and plant doubts in our hearts and minds.

Our beliefs in such vulnerable states may become overpowered by feelings of the moment resulting in the dwindling of our faith. Some of us start questioning the fairness and wisdom underlying such divine decisions while others get mired in a blame game. All in all, we may find ourselves lost, helpless, and stalled finding it difficult to gather ourselves and move forward.

For such situations specifically and others in general, Islam teaches us to stay in control by hanging on to the Mercy and Grace of Allah. We pray that Allah keeps us safe from the challenges and trials of life, but as Muslims we should know and understand Quran’s message and the prophet’s guidance for handling tough moments in life. The following summarizes some of the key guidance related to this matter.

Do not feel helpless

Even when all doors appear to have been closed, as true believers we should never let feelings of helplessness succumb us. Consider the following Hadith of the Prophet (peace be upon him) and ibn Al-Qayyim’s commentary on that Hadith:

It was narrated from Abu Hurayrah (may Allah be pleased with him) that the Prophet (peace and blessings of Allah be upon him) said: “The strong believer is better and more beloved to Allah than the weak believer, although both are good. Strive to do that which will benefit you and seek the help of Allah, and do not feel helpless. If anything befalls you, do not say ‘If only I had done (such and such), the such and such would have happened,’ rather say: ‘Allah has decreed and what He wills He does,’ for ‘if only’ opens the door to the work of the shaitan.” (Muslim, 2664).

Ibn al-Qayyim (may Allah have mercy on him) said: This Hadith includes several important principles of faith, including the following: “Do not feel helpless”: Feeling helpless is contrary to striving for that which will benefit him, and it is contrary to seeking the help of Allah.

The one who strives for that which will benefit him and seeks the help of Allah is the opposite of the one who feels helpless, so this is telling him, before what has been decreed happens, of that which is one of the greatest means of attaining it, which is striving for it whilst seeking the help of the One in Whose hand is control of all things, from Whom they come and to Whom they will return.

If he does not attain what was not decreed for him, then he may feel either of two things: Helplessness, which opens the door to the work of the Satan, so his sense of helplessness leads him to say “if only,” but there is nothing good in saying “if only” in this case, rather that opens the door to blame, panic, discontentment, regret and grief, all of which are the work of the Satan.

The Prophet (peace and blessings of Allah be upon him) forbade us to open the door to his works in this manner, and told us to adopt the second option, which is looking at the divine decree and bearing it in mind, for if it was decreed for him it would never have missed him and no one could have prevented him from attaining it. Hence he said: “If anything befalls you, do not say ‘If only I had done (such and such), the such and such would have happened,’ rather say: ‘Allah has decreed and what He wills He does,’” and he taught him that which will benefit him in either case, whether he gets what he wanted or not. Hence this hadeeth is one which a person can never do without. (Shifa Al-Aleel, 37-38)

As mentioned in the Hadith above, a strong faith can help us to hold our heads high. When faith seems to be dwindling, we should get back to Quran and remind ourselves that only Allah can let us out of our ordeal and problems. You must, therefore, keep that faith and not let Satan instill thoughts that could weaken your faith. Allah says in the Quran: If Allah helps you, none can overcome you; and if He forsakes you, who is there after Him that can help you? And in Allah (Alone) let believers put their trust. (Qur’an, 3:160)

A strong faith can keep you focused on the fact that Allah alone ultimately controls all destinies and has power over all things. Remembering that fact alone at the moment of affliction can help you in conquering the pain and provide you hope and the energy to keep moving forward.

Believe in the divine decree

When facing difficulties, our weak faith can sometimes drive us to question the fairness of it all. In this context, we should remind ourselves that believing in Al-Qadr (Allah’s divine will and decree) is one of the pillars of Islamic faith. As the Prophet (peace be upon him) said, it means belief in i. Allah, ii. His Angels, iii. His revealed Holy Books (Qur’an, Bible, Torah, Zabur), iv. His Messengers, v. Day of Judgment and 6. To believe in Al-Qadar (the divine decree) both good and bad.

As part of that belief, we should, therefore, recognize that Allah does what He wills for reasons that are only known to Him. Any attempt to comprehend the wisdom of it all using our limited faculties, or to understand how our current situation fits in His overall plan can only lead us to erroneous conclusions resulting in increased frustrations.

We, as Muslims, should accept Allah’s Decree both as it manifests itself around us and in our lives. It should be a relief to us that only Allah is the master of our destiny and we are only going to be tested about whether we reacted to what befalls as true believers and Mo’mins, i.e. being patient in adversity and grateful in prosperity.

Ask for Allah’s Mercy and Grace for an Out from Tough SituationsAs believers we should recognize that only Allah’s Grace and Mercy can deliver us from challenging situations. Allah tells us in the Quran: “They after that you turned away. Had it not been for the Grace and Mercy of Allah upon you, indeed you would have been among the losers.” (Quran, 2:64)

Another way to ask for Allah’s Grace and Mercy is by asking for His forgiveness and seeking repentance. Allah tells us in the Quran: And (commanding you): “Seek the forgiveness of your Lord, and turn to Him in repentance, that He may grant you good enjoyment, for a term appointed, and bestow His abounding Grace to every owner of grace (i.e. the one who helps and serves needy and deserving, physically and with his wealth, and even with good words). But if you turn away, then I fear for you the torment of a Great Day (i.e. the Day of Resurrection). (Qur’an, Surah Al-Hud: 3)

One of the best remedies for tough times is to be patient. It requires that we do not resort to complaining, but remember Allah often.

We know from the Qur’an that when we remember Allah in good times, Allah will help us in tough times. We learn that lesson from the story of Prophet Yunus (peace be upon him) when he was swallowed by a whale.

Out of His mercy, Allah finally relieved him out of that calamity. He tells us in the Qur’an: “Had he not been of them who glorify Allah, he would have indeed remained inside its belly (the fish) till the Day of Resurrection.”(Qur’an, Surah As-Saffaat: 143-144