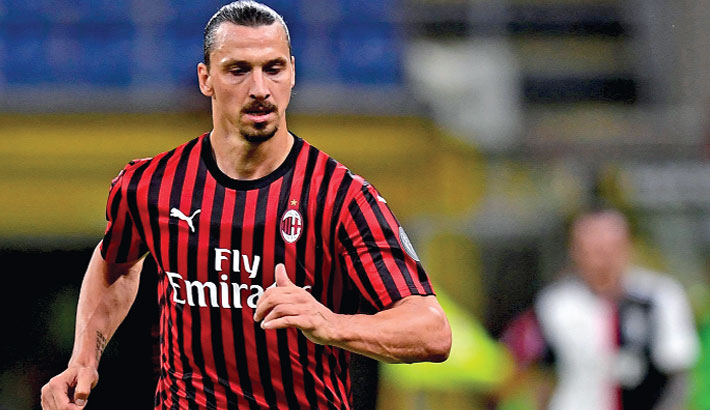 AC Milan forward Zlatan Ibrahimovic eyes the ball during their Italian Serie A match against Juventus at San Siro Stadium in Milan on Tuesday. – AFP Photo

Juventus wasted the chance to move 10 points clear at the top of Serie A as the defending champions blew a two-goal lead to lose 4-2 at a Zlatan Ibrahimovic-inspired AC Milan on Tuesday, after second-placed Lazio's shock defeat at Lecce.

Maurizio Sarri's men led through goals from Adrien Rabiot and Cristiano Ronaldo early in the second half, but were then blown away by a brilliant Milan display as Ibrahimovic scored and had an assist.

Milan coach Stefano Pioli, who could reportedly be sacked at the end of the season, saw his side boost their hopes of European qualification by moving above Roma and Napoli into fifth.

Juve remain on track for a ninth straight title, sitting seven points clear of Lazio with seven matches remaining, but could have rendered the race all but over with a victory.

The loss snapped the Turin giants' seven-game winning run in the league.

Juventus dominated the first half without finding a breakthrough as the closest they came was when Leonardo Bonucci glanced Miralem Pjanic's free-kick wide when unmarked only three yards from goal.

Ibrahimovic had a couple of speculative efforts easily held by Wojciech Szczesny at the other end and also saw a goal ruled out for offside.

The reigning champions burst into life after the interval though, as French international Adrien Rabiot drove forward and fired a fine left-footed shot from the edge of the area into the top corner to score his first Serie A goal.

Ronaldo doubled the advantage less than eight minutes into the second half, netting for the fifth consecutive game and for the 26th time in Serie A this term with a cool finish.

But Milan were handed a lifeline out of nowhere on the hour mark as Bonucci was penalised for handball, and Ibrahimovic stepped up to score his sixth goal since returning to the San Siro from LA Galaxy in January.

The 38-year-old made it back-to-back games with a goal and an assist in the 66th minute, teeing up Franck Kessie to score with a deflected strike.

Incredibly, Milan completed the turnaround with their third goal in five minutes as Rafael Leao beat Szczesny at his near post.

Ante Rebic had an excellent chance to make it 4-2 with 12 minutes remaining, but Szczesny did well to save with his boot,

The Croatian international wrapped up the points two minutes later though with his 10th league goal of the season.

Earlier, Lazio, who lost 3-0 to Milan at the weekend, slumped to a second straight loss, beaten 2-1 at relegation-threatened Lecce.

Defender Patric added to Lazio's problems in injury time as he was dismissed for biting Lecce's Giulio Donati and could face a lengthy ban, especially with the strict COVID-19 regulations in place.

Lecce ended a six-match losing streak in dramatic fashion to climb out of the relegation zone.

Lazio were without strikers Ciro Immobile and Felipe Caicedo through suspension against Milan, but both played a part as the latter gave the visitors a fifth minute lead, shortly after Lecce midfielder Marco Mancosu's strike was ruled out by VAR for a handball in the build-up.

Lazio survived a massive scare on the stroke of half-time as Lecce were awarded a penalty for a controversial handball against Patric, but Mancosu spooned his spot-kick over the crossbar.

Lecce centre-back Fabio Lucioni headed in a corner to give the home team a shock lead early in the second half.

Patric's moment of madness came in the third minute of added time when he bit Donati on the arm.