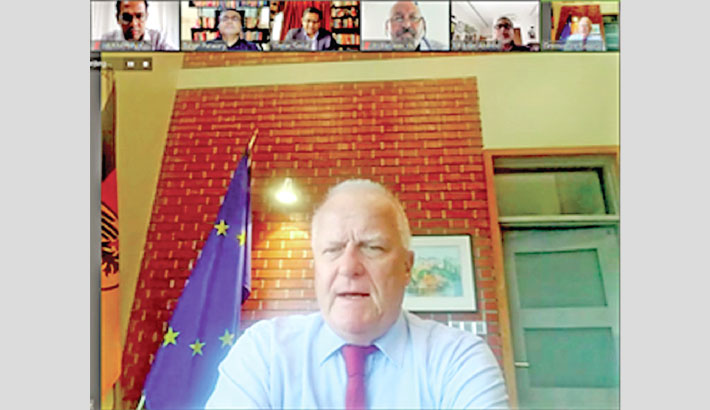 The Ambassador said this while speaking at a virtual discussion on matter of business interest to activate business in Bangladesh during Pandemic with Bangladesh German Chamber of Commerce and Industry (BGCCI) board members on Monday, says a release. 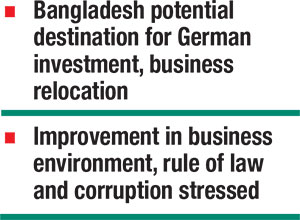 He said he sees Bangladesh as a robust economy and with dynamism, resilience and ambitions. “Bangladesh Economy will surely bounce back soon,” he said.

“German investment and trading companies are looking for new places for their investments and business. He said that Bangladesh will be one such important destination,” the German Ambassador informed.

However, he insisted on making bureaucracy more business friendly, rule of law, zero tolerance on corruption as proposed by the Prime Minister to cash in on the opportunity.

“It will definitely have good impact on overall business development,” he remarked.

He was frustrated that for the last three years no Bangladesh Business delegation visited Germany to explore new markets and investment.

He suggested that BGCCI should work on simplifying the rules and regulation for the investors and reducing the bureaucratic bottle necks.

The German Ambassador also suggested that BIDA should be more proactive and realistic for attracting FDI.

Giving example of neighbouring countries, he said he has not seen any new brochures to promote business in Germany. He suggested that BGCCI should come forward to publish such information Booklets and Brochures to attract new investors.

The Ambassador informed that the German Government has contributed $50 million for Rohingya Refugee camp in Cox’s Bazar; $20 million for readymade garments, affected workers wages and food packages through NGO for poor vulnerable families.

BGCCI president Omar Sadat assured that German companies intended to do business in Bangladesh can count on BGCCI’s support and acknowledge BGCCI as key contact and knowledge point for German companies.

As soon as situation improves, BGCCI along with BIDA and other business houses will visit Germany, he also informed.

BGCCI told German Ambassador that they have received invitation from German Chamber of Commerce, Berlin (AHK) to visit Germany.

The German chamber informed that they want to hold dialogue after Bangladesh Business delegation’s visit in Germany to further accelerate and develop business relations, he added.

He also informed that BGCCI is in contact with Bangladesh Ambassador in Berlin Imtiaz Ahmed to assist in making a business visit programme.